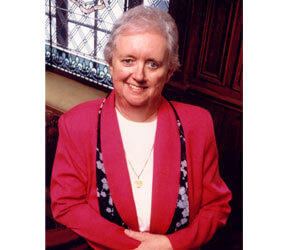 WASHINGTON – With an estimated 184 million adults using the Internet and 75 percent of 18- to 34-year-olds having a Facebook or MySpace account, the Sisters of the Society of the Holy Child Jesus are going high-tech to spread information about their order and the call to a religious vocation.

In response to the decrease in number of women answering the call to sisterhood, religious orders are using a variety of technological ways as outreach.

Three sisters of the society each use a different method to extend their reach beyond the church door and are painting a more modern picture of what it means to be a woman religious.

For the past two years, Sister Mary Ann Buckley has been serving in Chile, ministering to migrant women. She helped expand the society’s reach in Latin America with the development of a Spanish-language Web site.

Sister Mary Ann not only maintains the Spanish Web site, but she shoots and uploads video clips to the Web and provides occasional theological reflections on her blog.

“I don’t really know a lot,” she said modestly. “Just the basics. I’ve been teaching myself how to use iMovie on my Mac to edit some clips.

“It’s just a basic program though. I do use Adobe for PhotoShop and I keep on saying that I’m going to learn Dreamweaver but I keep putting it off. It looks a bit hard,” she told Catholic News Service in a telephone interview.

Sister Mary Ann pointed out that Mother Cornelia had a fondness for the arts and insisted that the modes of creative expression be a part of school curriculum.

Sister Margaret Mary Bell added that the society encourages its members to use their creativity and adapt to the ways society is changing in order to understand and communicate with others.

“Although we’re small, the SHCJ is very interested in and open to using different technologies and encourages us to use our personal creativity to develop ways to spread the Gospel,” Sister Margaret Mary said.

Sister Pat, the executive director of Wordnet Productions Inc. in California, conducted focus groups and interviews with young adults to target a demographic of 18 to 34-year-old women. Sister Pat was introduced to Larry Jilk, a retired banker, who agreed to fund the project. One of Jilk’s hobbies is promoting religious vocations among women.

“Some would say its serendipitous that we met. Others would say it’s the power of God. For me, the point is that it happened,” Sister Pat told CNS. “I thought it was … strange that a man was so interested in vocation for women but he told me, ‘You always see things about men contributing to the priesthood, but I want people to know that sisters are doing amazing things too.’“

Sister Pat is distributing 10,000 copies of the film and recently had it dubbed in Spanish. It is advertised on three Web sites, through campus ministries and at parishes. She hopes to make more films and also wants to get a one-minute ad to show in movie theaters.

According to church statistics the number of women religious has declined by 65 percent since 1965. Much debate surrounds the cause of the decline, with such factors as declining family size, materialism, secularism and the 1960s feminism movement cited.

All three of the sisters interviewed by CNS attended Catholic schools and credit their exposure to the women religious teaching at their schools as helping them decide on joining the order. All agree that the scarcity of women religious in schools today may be a contributing factor to the decline in interest in religious life.

More information about Wordnet Productions is available at www.wordnet.tv.