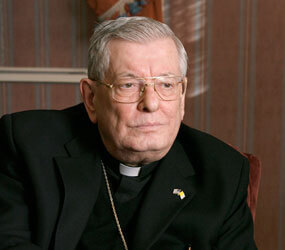 WASHINGTON – Archbishop Pietro Sambi, papal nuncio to the United States, has been placed on “assisted ventilation” since experiencing complications from “delicate lung surgery” performed two weeks earlier, according to the apostolic nunciature in Washington.

The ventilation is necessary “to attempt recovery of his lung function,” the nunciature said in an announcement released the evening of July 22.

“The apostolic nunciature and the nuncio’s family kindly ask that bishops, priests, religious and lay faithful offer sacrifices and prayers for the health of the apostolic nuncio,” it said.

As of midday July 25, no update on his condition was released. In response to a call from Catholic News Service that morning, a receptionist at the apostolic nunciature said all media queries were being handled by the U.S. bishops’ Office of Media Relations. Information on where the archbishop was hospitalized has not been made public.

A veteran Vatican diplomat, Archbishop Sambi, 73, was named papal nuncio to the United States by Pope Benedict XVI in December 2005. At the time of his appointment, he was the Vatican’s representative to Israel and Palestine, where he helped arrange Pope John Paul II’s historic pilgrimage to the Holy Land in 2000.

After he arrived in the United States Feb. 24, 2006, he said in an interview with CNS in Washington that that he was impressed by the vitality of U.S. Catholicism, the level of weekly Mass attendance among U.S. Catholics and their generosity toward others.

As a papal diplomat, “I travel a lot throughout the world,” he said. “It is difficult to find a part of the world where the charity of U.S. Catholics did not reach the poor or sick people.”

The archbishop is known for his warm and affable manner, sense of humor and being open and ready to listen to people.

During Pope Benedict’s April 2008 visit to the United States, Archbishop Sambi accompanied the pope and during the pontiff’s stay in Washington hosted him at the nunciature, where the pope held a historic private meeting with five victims of clergy sexual abuse.

Archbishop Sambi, a native of central Italy, was ordained to the priesthood in 1964. He was named an archbishop and nuncio to Burundi in 1985, a position he held for six years until being named nuncio to Indonesia.

In 1998, Pope John Paul II named the archbishop to be the new nuncio to Israel and Cyprus and apostolic delegate in Jerusalem and Palestine.

Archbishop Sambi was the second Vatican ambassador to Israel; the Vatican and Israel established full diplomatic relations in 1994.