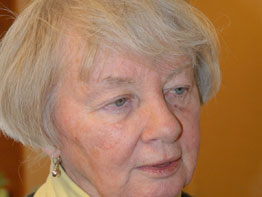 ADRIAN, Mich. – Dominican sisters and friars throughout the world are able to make their justice and peace concerns known in the international community through Dominican Sister Eileen Gannon, the main representative of the Dominican Leadership Conference to the United Nations.

From offices just a couple of blocks from the United Nations’ headquarters in New York City, the Dominicans are among the nongovernmental organizations, or NGOs, that maintain a presence at the world body, expressing positions and offering input on policy proposals.

Sister Gannon meets with U.N. Secretariat staff and makes presentations to gatherings of member nations’ representatives and also to other NGOs.

The leadership conference, based in Forest Park, Ill., is the networking organization for elected leaders of Dominican congregations and provinces in the United States. It serves 29 congregations of sisters and four provinces of men, representing about 6,000 Dominican men and women.

Originally motivated to establish a U.N. presence by concern about the effects of the post-Gulf War sanctions on Iraq, the Dominicans have remained concerned about Iraq as the situation has changed over the 10 years of the Dominicans’ work at the United Nations.

“We have been consistent advocates for the humanitarian concerns of the people of Iraq,” Sister Gannon said in an interview with The Michigan Catholic, newspaper of the Detroit Archdiocese.

Of special concern at present is the mounting problem of some 2 million Iraqi refugees who have fled their strife-torn country, as well as another 2 million who are displaced within Iraq.

Sister Gannon was in Michigan in late January for a conference of communications directors of Dominican congregations from across the country.

She is slated to return to Adrian April 1 to deliver an address on the interdependence of all peoples worldwide at the Ward Conference Center on the campus of the Adrian Dominicans.

Since 2000, Sister Gannon, who is a Sparkhill, N.Y., Dominican, also has worked to promote the U.N. Millennium Development Goals, a set of eight objectives that aim to make a substantial impact on poverty, hunger and disease by 2015.

“They’re a wonderful set of goals, and the United States did sign on in support of them, but they get no publicity in our country,” she said.

But Dominicans worldwide have all endorsed the goals, and the Dominican Leadership Conference’s U.N. mission tries to keep its constituents informed about progress – or lack of progress – being made to achieve them, Sister Gannon continued.

“I’m heartened by the fact that some nations of the world have taken this seriously. Most countries, however, and our country in particular, have failed to live up to what they have promised,” she said.

As she looks forward to moving on to another assignment this fall, Sister Gannon said she believes it has been useful for the Dominicans to be able to share their views and experience with other nations and other NGOs.

“And it has helped us, as Dominicans, to see ourselves as part of a worldwide community – not just a national community,” she added.