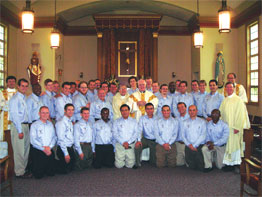 For years, Catholics in the Archdiocese of Baltimore have been praying for more seminarians – offering special intentions during Mass, holding Holy Hours in front of the Blessed Sacrament and saying rosaries for vocations.

Someone seems to be listening.

Fourteen men have been accepted as priesthood candidates this year, one more than last year, when the archdiocese hit a 19-year high in the number of accepted candidates.

There is currently a total of 38 men preparing for the priesthood, up by 10 from last year. Archdiocesan leaders believe Baltimore is on track to hit the 50 mark soon.

“It’s the result of not just a month or a year, but many years of hard work on the part of the vocation office,” said Archbishop Edwin F. O’Brien, who has made vocations one of his top priorities since his October 2007 installation.

“The priests are very conscious of promoting vocations on a parish level, and that’s where it’s done,” he said, noting that there remains a great need for more vocations.

“I would suspect that the concentration on eucharistic prayer is also having an impact,” he said.

The new crop represents 12 parishes throughout the archdiocese, with one candidate hailing from Oklahoma. Two parishes, St. Peter in Libertytown and St. Mary in Hagerstown, have multiple candidates, and three of the new seminarians are international candidates from Colombia and Nigeria.

One of the candidates, Deacon Gregory Rapisarda, is a permanent deacon who received permission from Archbishop O’Brien to become a priest.

Ten of the new candidates are 25 or younger, and the class as a whole is younger than those of previous generations, according to Father Gerard Francik, archdiocesan vocation director.

“It’s a trend that began last year,” said Father Francik. “We have a number of them who are in first-, second- or third-year college.”

Father Francik said he was “amazed by the depth of their spirituality and the practices they know that help them with their prayer life.”

“If you talked to candidates 10 years ago and asked them if they did a Holy Hour, prayed the rosary or knew what the Liturgy of the Hours is, they would probably say no,” said Father Francik. “Now, they talk about that very freely. I have guys talking about Lectio Divino at 19 years old.”

In recent years, the vocation office has promoted programs to foster the call to religious life. “Operation Genesis” and “Dare to Dream,” two daylong priesthood vocations camps for boys and teens, have attracted young people from throughout the archdiocese. A similar program was launched for high school juniors.

Continuing a tradition of Cardinal William H. Keeler, Archbishop O’Brien has held regular informal gatherings and dinners with men interested in becoming priests. He has encouraged eucharistic devotion to promote vocations and has called on every parish to pray for vocations during Mass.

“The archbishop’s push really helped, and I think anyone who might have been on the fence knows they have a very supportive person in the archbishop,” said Father Francik.

The vocation director said young people understand that entering the seminary doesn’t mean they are locked in to becoming a priest.

“It gives them great freedom to check it out and grow in faith,” he said, noting that the archdiocese is considering opening a formation house in Baltimore, where international students and some college seminarians could live together.

“God will let them know what he wants for them and where they are going to be happy and fulfilled,” he said.

Men entering the seminary this year will undergo up to seven years of formation, depending on whether they need to complete college.

Michael Rubeling, a 19-year-old parishioner of St. Peter in Libertytown, said the example of his pastor played a big role in his decision to become a seminarian.

“I remember when I was 8 and I was at Christmas Eve Mass,” said Mr. Rubeling, who will be a college candidate at Our Lady of Providence College Seminary in Rhode Island. “I saw my pastor on the altar and music was playing. I thought, wow, I could do that – I could serve God.”

Mr. Rubeling said young people are attracted to the priesthood because it offers a heroic way of living their lives in service of others.

The example of priests and committed Catholics also influenced Teddy Burkhardt, 19, a parishioner of St. Michael, Poplar Springs, who will study at Our Lady of Providence as a college candidate.

“The biggest obstacle was giving my heart to God instead of a woman and a family,” he said.

Hamilton Okeke, a 28-year-old Nigerian, and Julian Garcia, a 21-year-old native of Colombia, said they decided to study for the Archdiocese of Baltimore because of the great need for priests in America.

Bishop Denis J. Madden, urban vicar, was the retreat master throughout the week. In his closing talk, he encouraged the seminarians to live a balanced life.

“The church needs witnesses,” Bishop Madden said. “Live every day according to what we know to be the right thing. That is our pilgrimage.”

Archbishop O’Brien will be at a “vocations barbecue” for those considering the priesthood Aug. 7 from 5-7:30 p.m. at the Cathedral of Mary Our Queen, Homeland. For more information, call 410-547-5302.