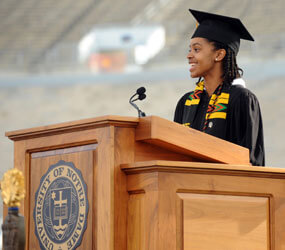 WASHINGTON – When Katie Odette Washington of Gary, Ind., took the stage May 16 as what is believed to be the University of Notre Dame’s first black valedictorian, she told her fellow graduates to step outside of their comfort zone and challenge the conventional to make their imprint on the world.

In an address that focused on future challenges “beyond the applause,” the biological sciences major who earned a 4.0 grade-point average from one of the country’s most identifiable Catholic universities, urged the new graduates to learn from the silences that often follow moments of exaltation.

“While applause is accompanied by feelings of safety and security, this silence can bring vulnerability and uneasiness,” Washington said. “Through my experiences at Notre Dame, I’ve found these silent uneasy moments usually spring up right after I get comfortable with self praise and appreciating my own accomplishments.”

The 2006 graduate of West Side High School in Gary, who also minored in Catholic social teaching while attending Notre Dame in South Bend, Ind., talked about the pride she felt when her research paper on the mosquito that carries dengue and yellow fever was published last December.

She then took a moment to talk about the grief she endured when she learned about the devastating January earthquake that rocked Haiti and took the lives of so many people in the country she had hoped her research would help.

Video of the commencement was posted on the Notre Dame website.

Washington, who could not be reached for comment about being chosen valedictorian, has received accolades throughout her young life, and has also attempted to help others struggle through the moments of silence in their lives.

During her undergraduate years at Notre Dame, she directed the school’s Voices of Faith gospel choir, served as the student coordinator of the Center for Social Concerns’ “Lives in the Balance: Youth Violence and Society Seminar,” and was a mentor/tutor for the Sister-to-Sister program at South Bend’s Washington High School, according to a statement issued by the university’s press office.

Washington is believed to be the first black Notre Dame graduate to be named valedictorian, but the university chose not to highlight this point because the school hasn’t kept records of the race, ethnicity or gender of previous valedictorians throughout the years, said Dennis Brown, a university spokesman.

Notre Dame’s president, Holy Cross Father John I. Jenkins, called Washington a graduate who should be admired for her determination and accomplishments during her time at the university.

“Katie, you have not only challenged your classmates, but you’ve challenged every one of us in this football stadium as well,” Father Jenkins said after her valedictory address.

Though Washington’s valedictorian status may have been be a historic event at Notre Dame, some of her professors and fellow classmates were not surprised when the university made its selection earlier this year.

Tamara Jones, a black student who entered Notre Dame as a freshman last fall, credited Washington for getting her through her tumultuous first year.

“The beginning of the year was really, really, really rough, and she was always willing to take time out, regardless of her schedule, to come meet with me and figure out how she can help me get through these classes,” Jones said in the video. “She was kind of like the big sister figure. She was always like, ‘Oh, you can do this.’“

Dave Severson, professor of biological sciences and director of the university’s Eck Institute for Global Health, called Washington a trailblazer who is destined for greatness.

“There couldn’t be a better person to be the valedictorian,” Severson said. “You know, in my mind she is the Catholic mission in terms of the kind of things that we think about in terms of the University of Notre Dame. We know she’ll go off and do just incredible things.”