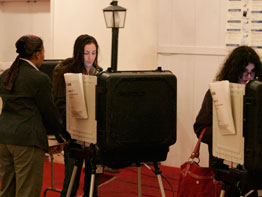 BROOKLYN, N.Y. – A “hierarchy of values” exists, which means not all political issues are of equal value, said Bishop Nicholas DiMarzio of Brooklyn.

“Our faith must inform our political decisions,” he said, and Catholic voters are obliged to distinguish “between moral evil,” such as abortion, “and matters of prudential judgment,” such as tuition tax credits.

Bishop DiMarzio made the comments in an address Feb. 7 to a crowd of 500 at the Cathedral Club of Brooklyn’s annual dinner. His remarks drew on the U.S. bishops’ 2007 document, “Forming Consciences for Faithful Citizenship: A Call to Political Responsibility.”

When he was chairman of the bishops’ domestic policy committee, Bishop DiMarzio headed a committee of chairmen of other USCCB committees that drafted the document, which was prepared in an effort to form consciences, not make decisions for voters. It was issued last November.

The bishops have issued a “Faithful Citizenship” document every four years since 1976.

In his talk, the bishop referred primarily to issues in New York state. He described as “a most radical abortion bill” legislation proposed by Gov. Eliot Spitzer and known as the Reproductive Health and Privacy Protection Act.

The bishop said it would legalize partial-birth abortion, a procedure which he noted the late U.S. Sen. Daniel P. Moynihan, D-N.Y., described as “near-infanticide.”

Bishop DiMarzio said the measure would “disenfranchise parents of their right to play a central role in the most significant decisions of their minor children” because it prohibits parental notification, and it would also expand access to over-the-counter pharmaceuticals “that destroy human life.”

“In our own country, despite significant victories that extend protection to the unborn, this modern slaughter of the holy innocents continues because of the policies of unscrupulous politicians,” he said.

“Only in circumstances that are extraordinarily hard to contemplate may a Catholic voter support a proponent of so great an intrinsic moral evil,” the bishop said.

Bishop DiMarzio also questioned legislative efforts “that would undermine the family by redefining marriage.” He said that “pandering to a small but well-funded special interest group, our leadership in Albany would undermine the institution that is the bedrock of our society.”

Saying that the business of government is to protect the common good, the bishop asked how the state benefits by extending “the benefits of marriage” to same-sex couples.

On the issue of tax credits for the parents of children who attend nonpublic schools, which he strongly endorses, the bishop said the 15 percent of children in the state who attend those schools save taxpayers tens of millions of dollars.

Yet, he said, “the working-poor Catholic families of our state and diocese that are making a contribution to the common good continue to be disenfranchised.”

In contrast to a moral evil, a position on educational tax credits is a matter of prudential judgment. “People of good faith are free to disagree,” he said. “The church doesn’t say that people can’t take the wrong position, the church only says you cannot take a position that will promote immorality.”

The bishop also addressed the subprime mortgage crisis that has resulted in a sharp rise in home foreclosures.

“We in the diocese are committed to working with elected officials to assist those in jeopardy of losing their home,” he said.

Stating that the diocese is also committed to ensuring that housing is affordable for working families, the bishop said this and similar issues “are important and must be considered by voters.”

Turning to the war in Iraq, Bishop DiMarzio said Pope Benedict XVI “has made no secret of his personal opposition” to the conflict, “in which 4,000 servicemen and servicewomen have died, 50,000 have been wounded and the lives of tens of thousands, perhaps even a hundred thousand, Iraqis have been crushed.”

Many theologians contend that a pre-emptive war cannot be justified in Catholic teaching, he said.

The current debate over troop surges or withdrawing troops or timetables for withdrawal, however, “is a matter of prudential judgment,” he said.

In viewing the range of issues elected officials and candidates might take on the national and local levels, Bishop DiMarzio said that support for anyone who “espouses policies that are gravely immoral” is possible “only under exceptional circumstances that are hard to imagine.”

In specific terms, the bishop urged Catholics to “register voters, knock on doors and be generous in your contributions to candidates and those institutions that will ensure our voice is heard. There is so much at stake that we cannot afford to sit on our hands.”

Frank J. Keating, president of the Cathedral Club, founded in 1900, encouraged the dinner guests to join the Catholic Citizens Committee. It describes itself as “a grass-roots organization of Americans who want to see Catholics and our church treated fairly – by government and politicians, the media and society in general.”

He said further information was available on its Web site, www.catholiccitizenscommittee.org.