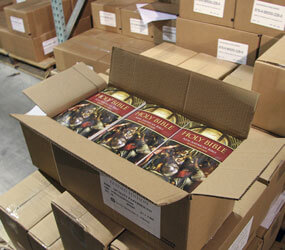 CHARLOTTE, N.C. – A newly revised Bible hit bookstore shelves on Ash Wednesday across the United States, thanks in part to St. Benedict Press/Tan Books in Charlotte.

The longtime publisher of Bibles and Catholic classics shipped out more than 10,000 copies of the New American Bible Revised Edition, or NABRE, in just one week – and that’s just from pre-orders taken since approval of the new Bible translation was announced Jan. 6.

NABRE includes the first revised translation since 1970 of the Old Testament. The New Testament translation is the same as in 1986 and later editions of the New American Bible.

It also includes the updated Book of Psalms, which was revised between 1991 and 2010 and has been included in versions of the New American Bible published since 1991.

A variety of publishers are releasing NABRE, rolling their versions out on their own schedules.

Bookstores including more than 700 Barnes & Noble stores across the United States and Canada pre-ordered Bibles from St. Benedict Press for the March 9 launch, the book’s official release date set by the U.S. Conference of Catholic Bishops. Pallets of boxes containing the new Bibles began shipping out several days ago in time to be stocked on the shelves for the Ash Wednesday debut.

“We wanted to bring this out as soon as possible,” said Conor Gallagher, vice president of publishing for St. Benedict Press, because the U.S. bishops clearly understood the importance of this new translation for Catholics.

The new red-letter edition includes popular daily prayers such as the Morning Offering and the Angelus, as well as a calendar of readings, commentaries and cross-references. The cover design from the Charlotte publisher features a detail from the painting “Pentecost” by Titian.

“We hope to produce many special editions for particular parishes, colleges and schools,” he told the Catholic News Herald, newspaper of the Charlotte Diocese.

Gallagher said they wanted the new Bible printing to include information that is clearly Catholic.

The publishing company has a staff of about 30 and operates in two locations in the Diocese of Charlotte – its 24,000-square-foot main office in south Charlotte as well as a new warehouse in Gastonia that it has expanded to because of the business’s recent growth and merger with its former competitor, Tan Books.

The family-run company believes strongly in its mission to present the Catholic faith in an attractive and accessible way, Gallagher said, and employees – Catholic as well as non-Catholic – pray the Angelus each day at noon. Gallagher and his family are members of St. Ann Church in Charlotte, while Rotondi is a member of St. Vincent de Paul Church in Charlotte.

“We wanted this Bible to be Catholic all the way through,” said Gallagher. “We really wanted it to be different from a Protestant Bible.”

Besides three different printing formats for the new Bible that are now available, St. Benedict Press is producing e-books for the Kindle and Nook e-readers.

Coming within the next couple of months will be large-print and compact-size editions, followed by specialty printings for men’s, women’s and teen devotions. Custom printings for parishes, schools, orders and Catholic organizations are being made available with minimum orders of 50 copies.

St. Benedict Press publishes more than 40 different editions of the Bible, printed in a variety of formats and customized for any occasion. The NABRE is the latest in its collection, which also includes the New American Bible, the Revised Standard Version and the Douay-Rheims. St. Benedict Press is the only U.S. publisher to print all four Catholic versions of the Bible, Gallagher said.

As of March 9, its editions of the NABRE were ranked in three of the four top-selling positions on Amazon.com.

The NAB sold an estimated 1 million copies per year. The NABRE is expected to surpass that figure in its first year, Gallagher said, making it likely the top-selling Catholic book of 2011.