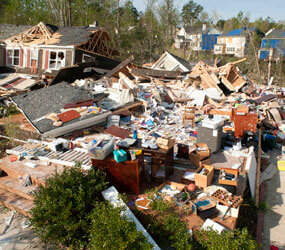 RALEIGH, N.C. – Bishop Michael F. Burbidge of Raleigh urged Catholics in the diocese to include in their prayers for Holy Week a special intention for the victims and survivors of the deadly tornadoes that ripped through portions of the diocese April 16.

According to the National Weather Service, 25 tornadoes swept through North Carolina. On April 20, a 50-year-old woman died of injuries she suffered in the storm, bringing the death toll to 24. It was estimated that more than 800 homes were damaged or destroyed.

Bishop Burbidge directed the Raleigh Diocese’s 95 parishes and mission churches to hold a special collection with the money to be dedicated entirely to disaster relief.

In a video message posted to the diocesan website, www.dioceseofraleigh.org, the bishop noted that while pictures of the devastation are dramatic, the fact that people’s lives have been traumatically affected is much more significant.

“In a matter of seconds,” Bishop Burbidge said, “many lost all their possessions, some were badly injured and sadly several lost their lives.”

Four fatalities were children who lived in the same home in a mobile home park. Two were 8 years old, one was 3 and one was 6 months old. An evening funeral Mass for the four was being celebrated at St. Raphael the Archangel Church in Raleigh April 20.

Bishop Burbidge pointed out that within hours of the storm’s passing, Catholic Charities’ seven regional offices had contacted all pastors and pastoral administrators to find out about damage in their parish communities and within their parish boundaries.

Once an assessment was made, the regional offices joined with governmental agencies and other nonprofit organizations to address the most immediate needs. According to agency officials, providing counseling for survivors is always a priority in the first hours shortly after disaster hits.

Rick Miller-Haraway, Catholic Charities regional director in Raleigh, explained that immediate counseling is especially important for migrants and the poor, because most of them do not have insurance and can easily fall through the cracks for receiving assistance.

Miller-Haraway noted that Catholic Charities’ workers aim to assist people as quickly as they can after disaster strikes and remain with them even after first-responders complete their work.

In Raleigh, the agency staff members were on the scene of the affected mobile home park within hours after the tornado struck. Consuelo Kwee, director of the Hispanic Family Center, gathered the mostly Hispanic residents together to pray the rosary.

In a normal week, Catholic Charities provides food to hundreds of people through its Catholic Parish Outreach and its Hispanic Family Center facility. On April 18, the parish outreach provided more than 400 families with food. With the power out, volunteers worked with flashlights to bag groceries for families who rely on the outreach program’s food pantry.

Another hard hit area was Bertie County, the site of 11 of the state’s fatalities.

Catholic Charities staff members operating out of Hertford were on the scene working with the Catholic Community of Bertie County The small community is ministered to by Glenmary Missioners, who were working closely with government agencies to help the rural, mostly poor residents.

“I’m grateful for the numerous calls I have received from my brother bishops, assuring our people of their prayers,” Bishop Burbidge said.

“In this holiest of weeks, I ask that you include a special intention in your prayers for those who have died, who were injured and who suffered property loss or damage,” he said. “Let us also pray for the first-responders who are providing assistance. May God bless you and your families during these sacred days and always.”