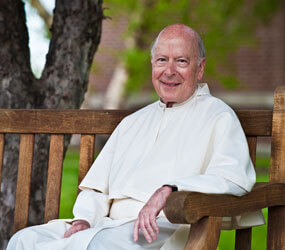 DE PERE, Wis. – Through all his years as an author and as an educator, Norbertine Father Alfred McBride has invited people to grow in their faith and in their relationship with God.

“My whole life has been catechetics,” said the priest, now 82.

On May 25, he was honored for his work as a nationally and internationally known catechist and author.

The National Conference for Catechetical Leadership gave him its “Catechetical Award” at the group’s annual conference in Atlanta. The award is given each year to an individual, a group of people or institution in recognition of outstanding or exemplary contribution to the ministry of catechesis.

“The award exemplifies the commitment of Father McBride to present the beliefs of the Catholic faith in a language that can be understood by the adults whose responsibility it is to pass on the faith they received at baptism,” said Leland Nagel, executive director of the National Conference for Catechetical Leadership.

“His writings, especially the popular ‘Teen Catechism,’ also ministers to adolescents who desperately seek the truth,” he added.

“We have always valued Father McBride’s contributions to religious education and are delighted he is receiving this much deserved award,” said Norbertine Father James Herring of St. Norbert Abbey. “Through his faith and writings he has touched the souls of thousands of people throughout this country and beyond. His work and recognition bring honor to all of us.”

Father McBride chatted about his life’s work and priestly ministry with The Compass, newspaper of the Green Bay Diocese, in an interview at St. Joseph Priory on the St. Norbert College campus in De Pere.

For most of his 58 years as a priest and teacher, Father McBride has been involved in religious education.

He currently serves on the advisory boards for three publishing houses, and looks forward to many writing projects in the future.

Father McBride is the author of more than 40 books as well as hundreds of other writings on topics ranging from church history, the lives of the saints, the interpretation of the Gospels, the Catechism of the Catholic Church, how to pray like Jesus and the saints, a short history of the Mass and six volumes of homilies.

He is known for taking a complicated topic and making it easy to understand and enjoyable to read. At one time he was a contributor to Catholic News Service’s Faith Alive! Religious education package.

He obtained a doctorate in this field from The Catholic University of America. In 1971 he was appointed founding director of the Department of Religious Education with the National Catholic Education Association, a post he held until 1979.

Father McBride has been a seminary professor and has hosted programs on the Eternal Word Television Network.

In his younger years, he was well-known as a “radio priest” on the local Norbertine-owned radio station.

Raised in Philadelphia, he was looking toward graduation and college in his senior year of high school when the principal called him in and told him he should become a priest.

In the summer of 1946, he and seven other young men boarded a train to De Pere and life in the Norbertine order. At St. Norbert College he earned degrees in philosophy and English. “That’s when I got a taste for literature and what writing is all about,” he said. He was ordained in 1953.

In 1962, he went to the Lumen Vitae International Institute for Catechetics and Pastoral Formation in Brussels, Belgium, for more courses in Scripture, liturgy, catechesis, psychology, anthropology and field trips to sample successful programs in religious education.

Soon after that, he was asked by a publisher to consider rewriting a religious education series, followed by a chance to publish his homilies and an invitation to become a visiting professor at Catholic University.

Father McBride credits a Jesuit friend for teaching him a lot about writing with just a few words of advice: Keep it simple, stay Scripture-based and tell stories that people will relate to.

The vitality of his life at 82 means still walking three to four miles each day. He always has with him his rosary and often carries it visibly as an example to others. In his rooms at St. Joseph Priory, he writes with inspiring views of the Fox River to one side and the St. Norbert campus on the other.

“I have had a terrific life,” said Father McBride.

The stories he tells of his life are peppered with the names and stories of those who shaped his life as a priest and catechist. His motto is simple: “I never let go of a friend.”