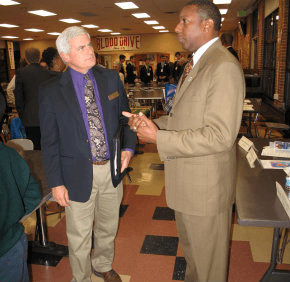 By George P. Matysek Jr.
gmatysek@CatholicReview.org
Twitter: @ReviewMatysek
Seeking to put the brakes on a five-year decline in enrollment that saw the number of students in Maryland’s nonpublic schools shrink by 22 percent, nonpublic school advocates are pushing state lawmakers to pass a business tax credit they believe will help stabilize their schools.
The proposed Maryland Education Credit, which will be introduced in the upcoming legislative session in Annapolis, would provide companies and individual businesses a 60 percent tax credit on donations to nonprofit “student assistance organizations.” Those organizations would then help with student expenses such as tuition, supplies, tutoring, transportation and special needs services.
Approximately 60 area parents, students and educators attended a Nov. 13 open house at Mount St. Joseph High School in Irvington to discuss the measure with lawmakers,
All three participating Baltimore legislators – Del. Keiffer Mitchell Jr., Del. Keith Haynes and Del. Samuel Rosenberg – said they favored the measure.
Mitchell, one of the bill’s sponsors, noted that Baltimore Mayor Stephanie Rawlings Blake has made it her mission to attract 10,000 new families to the city. The cornerstone to attracting those families, Mitchell said, is education. Last year, he said, the state approved nearly $1 billion to build and renovate public schools in Baltimore.
“That’s a huge step,” Mitchell said, “but many of us recognize that it’s not just the public schools. We need to attract all students and all families to look at other schools also.”
Mitchell noted that there are 25 business tax credits in Maryland, but none is allocated to education.
“This is a very important mechanism to attract business support and also help sustain our nonpublic schools,” he said.
The bill would provide a maximum of $15 million annually for the tax credit. Sixty percent of credits will be designated for nonpublic school students and 40 percent for students attending public schools.
Leaders of the Maryland Catholic Conference (MCC), Annapolis-based legislative lobbying arm of the state’s bishops, pointed out that Maryland already provides some support for nonpublic school families in the form of $6 million for nonreligious textbooks and technology and $3.5 million for security and infrastructure upgrades.
When compared with neighboring states, however, the numbers are small, they said, especially considering that nonpublic schools save Maryland taxpayers $1.4 billion a year.
In the 2013-14 school year, Pennsylvania provided $340.4 million for textbooks, services and tax credits. New Jersey provided $164.3 million for similar efforts and New York allotted $207 million, according to the MCC.
“We believe the tax credit will lower the costs across the board, so that more financial assistance is able to be given out to lower and middle-income students,” said Garrett O’Day, associate director for education and family life with the MCC. “That is the priority basis on which the bill proposes to give out donations – to help those lower and middle-income students attend the school of their choice.”
Rosenberg, an early supporter of textbook aid, said support for nonpublic school students does not come at the expense of public schools.
“The money we spend as a state on public education K-12 is at historic levels – and it should be,” the lawmaker said. “But, we can do both things.”
There are currently 102,974 students enrolled in nonpublic schools in Maryland, according to the MCC, down from 145,256 in 2001-02.
For more information, visit educationmaryland.org.
For more stories on Catholic education, click here.
Also see:
Anne Arundel infant center of attention at pope’s audience
PrevNext