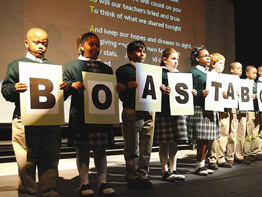 Henry Fortier calls it one of the “most painful” days in his life. After several years as principal of New All Saints School in West Baltimore – a time marked by increasing test scores and steady improvement in student performance – Mr. Fortier had to tell his students their school was closing.

“It was devastating,” said Mr. Fortier, now one of the Archdiocese of Baltimore’s associate superintendents. “It hurt to see them hurt. I had kids offering their allowances to keep the school open.”

New All Saints was one of 10 schools in the archdiocese that closed or merged within the last five years because of strapped financial resources and declining enrollment. Because of ongoing financial challenges, Mr. Fortier is convinced that even more schools will close unless they receive more support from the state.

Organized by the Maryland Nonpublic Schools Legislative Coalition, a series of 17 educational forums was held Jan. 8 throughout Maryland to educate members of the Maryland General Assembly about the contributions made by nonpublic schools.

Supporters sought a restoration of funding to $6 million for a program that provides nonreligious textbooks and technology in nonpublic schools. While school costs have gone up, funding dipped to just $3 million two years ago before being increased to $4 million last year.

Parents also asked lawmakers to approve a proposed program called BOAST – “Building Opportunities for All Students and Teachers in Maryland.” BOAST would provide up to $15 million in state tax credits to businesses that donate to scholarship organizations for students attending nonpublic schools. It would also help public and nonpublic schoolteachers pay for their ongoing education, while providing $10 million in business tax credits to help public schools.

Attending a forum at Cardinal Gibbons High School in Baltimore with more than 400 supporters, Mr. Fortier told The Catholic Review that inner-city schools play an especially important role. Educating about 9,000 students in the city, he said, Baltimore’s Catholic schools enroll 10 percent of the city’s student population.

“We provide a quality alternative in a great learning environment,” he said, “but some of our inner-city schools are teetering. If they don’t get legislative help, they’ll close.”

According to Mary Ellen Russell, associate director for education with the Maryland Catholic Conference, nonpublic schools throughout Maryland save the state more than $1.37 billion in per-pupil expenditures.

Ebony Davis, a mother of a daughter at Mother Mary Lange Catholic School in Baltimore, attended the Cardinal Gibbons forum because she believes it is “a matter of fairness” for the state to give more aid. She chooses Catholic education because of its superior quality, she said.

“It’s a big financial sacrifice but it’s worth it,” she said. “I want the best for my child.”

Although 24 lawmakers were invited to the Cardinal Gibbons event, only three showed up: Del. Sandy Rosenberg, Del. Melvin Stukes and Sen. Verna Jones of Baltimore.