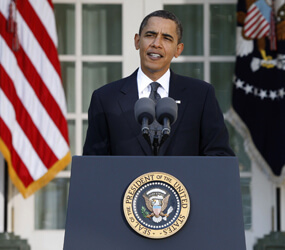 VATICAN CITY– News that U.S. President Barack Obama had been awarded the Nobel Peace Prize was met with high hopes from the Vatican spokesman.

Jesuit Father Federico Lombardi told journalists Oct. 9 that the news “was greeted with appreciation at the Vatican in light of the president’s demonstrated commitment to promoting peace on an international level and, in particular, in recently promoting nuclear disarmament.”

“It is hoped that this very important recognition would offer greater encouragement for such a difficult but fundamental dedication to the future of humanity so that it may bring about the desired results,” he said in a written statement.

The new U.S. ambassador to the Vatican, Miguel Diaz, told Vatican Radio that the president was being recognized for his efforts in working to build understanding between people and eliminate nuclear weapons from all parts of the world.

Winning the Nobel Peace Prize is a great encouragement to keep working toward building a better world, said Diaz.

He said that when he presented his credentials as the new U.S. ambassador Oct. 2, Pope Benedict XVI “made clear to me how grateful he was” that Obama was especially committed to ridding the world of nuclear weapons.

Bishops attending the Synod of Bishops for Africa also reacted to the selection of Obama.

Archbishop Wilton D. Gregory of Atlanta said it “clearly was an unexpected honor to come to the president” and he hopes that “it leaves an invitation for greatness.”

“I hope in receiving the award, the president realizes and responds to the great challenge that has been placed before him,” he told Catholic News Service Oct. 9.

“The world has sent a signal, at least insofar as the Nobel Prize is concerned, that it has high expectations for him and hopes he will live up to the energy and the positive things that he has thus far set on the world stage,” said Archbishop Gregory.

“I would like the world to look at it as an encouragement, a motivation” to recognize the talents and potential of Africans and people of African descent, he said.

“Blacks are as talented as anyone else … and I think the world is now coming face to face with the fact that if we are appreciated, we can give still more,” said Archbishop Palmer-Buckle.

The archbishop told CNS that Obama “definitely deserves” the prize and that the U.S. leader is an inspiration.

He recalled Obama’s visit to Ghana in July and how much he was moved by the president’s encouragement for people to take destiny into their own hands.

“He told the youths, don’t look to Europe, don’t look to America for solutions to your problems. You can, yes, you can. And I think we’ve taken it up … and we are going to do it,” he said.

The Norwegian Nobel Committee announced the U.S. president was chosen “for his extraordinary efforts to strengthen international diplomacy and cooperation between peoples.”

“Only very rarely has a person to the same extent as Obama captured the world’s attention and given its people hope for a better future,” it said Oct. 9.

Speaking at the White House later the same day, Obama said he was “surprised and deeply humbled by the decision of the Nobel committee.”

“Let me be clear: I do not view it as a recognition of my own accomplishments, but rather as an affirmation of American leadership on behalf of aspirations held by people in all nations,” he said.