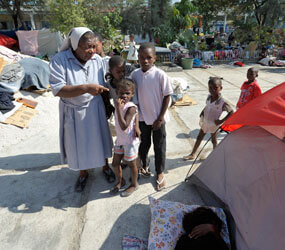 PORT-AU-PRINCE, Haiti – Sister Silvi Elie hasn’t eaten all day, and the tiredness shows on her face as she pleads with a Brazilian nongovernmental organization for some tents for the homeless families who have camped out on the patio of her convent, the House of Maria Auxiliatrix.

Tents are in short supply in the Haitian capital these days, and she has to argue forcefully. Her persistence finally pays off, and she fills her pickup with two loads of tents.

“I’m going to hide them until dark, otherwise people will swarm all over us to get them. After it’s dark I’ll give them quietly to families that have small children,” Sister Silvi said.

A Salesian nun who lives in one of the roughest areas of Port-au-Prince, Sister Silvi has been sleeping under the stars since the Jan. 12 quake collapsed most of the church sanctuary and other buildings they used for educating neighborhood children.

“We’re a center of reference for the community, and people come to us for help in solving their problems. Our job is to find the resources and people to solve those problems,” she told Catholic News Service.

That has not been an easy task. With the exception of frequent shipments of medical supplies and food from her congregation’s sisters in the neighboring Dominican Republic, few relief supplies have arrived here.

“While the people are dying, the international organizations are passing their time in meetings, in studies and planning. People fly around in helicopters looking at us, making the houses shake once again. But while they’re planning, the people are dying. We’ve now gone more than two weeks without any help, and they haven’t contacted those of us who could be most helpful in organizing the people. We’ve got to make the solidarity more concrete. We need fewer studies and plans while the people suffer and die,” she said, beginning to cry.

Sister Silvi’s complex, now a collection of jumbled buildings around a patio filled with makeshift shelters, sits at the confluence of the Haitian capital’s three most notorious neighborhoods: La Saline, Cite Soleil, and Belair. Before the quake, the seven sisters here ran a primary school and a jobs training program for more than 1,000 youths. Their special passion, however, was a residential school with 96 young women students. Sister Silvi, who is 62, was in that building, walking down a hallway, when the quake struck.

“The building started shaking and I found a column and hugged it. The bottom of the column came loose from the floor and it started dancing around, but I asked God for mercy and held on. I heard the cries of the students who were studying.

The two-story residential school didn’t collapse, but it has huge cracks, and Sister Silvi gives a visiting reporter a hurried tour of the ground floor. School papers still lie on desks and the floor. Everything is covered with a fine dust and chunks of walls and ceiling material that shook loose in the quake.

Sister Silvi has obtained water from the Brazilian nongovernmental organization down the street, which also gave her the tents, donated by Norwegian Church Aid. She spends part of each day sorting the food and medicines that come from the Dominican Republic, shipping most off to other parishes where her congregation is serving similar homeless populations.

“I can’t explain how the people have survived. The international community hasn’t done much for them. We have to buy rice and beans and cooking gas, which is much higher priced now, and we have to try to control who gets in here. People wander the streets looking for something to drink and eat. People are getting frustrated; they’re angry and will easily start shouting at you,” she said.

She says she’s particularly worried that the end of the month is approaching. With no work there will be no pay.

“I can’t get that out of my head. Besides dealing with all the material needs, how do I lift up the faith of the community? How are they supposed to go out to animate and cheer up the groups? These questions won’t let me rest. I didn’t really sleep until two nights ago, when I finally collapsed. People told me the next day my face looked better,” she said.

An aftershock rattles the ground. Sister Silvi stops for a moment, staring straight ahead. Then she breathes again.

“Despite all our difficulties, the people have an extraordinary faith. Since the moment the earth started shaking they called out to Jesus to save them,” she said. “It has been like a permanent retreat around here. The people don’t sleep. They lie awake and pray. And they sing with even more faith than before. They don’t see this as a curse, but know that the Lord wants to tell us something.”

For now, Sister Silvi worries about restarting her educational programs. Along with the damaged residential building, many of the other classrooms have collapsed.

“The government says we’re going to have to reopen the schools. But our classrooms are under the rubble. I don’t know when we’ll be able to start classes again. Nor do I know what the students will do in the meantime,” she said.

“Some of our people, including some of our students, are leaving the city, going to the countryside. But that’s not the best solution. They’re just going to make life in the countryside difficult for the people who already live there,” she said.