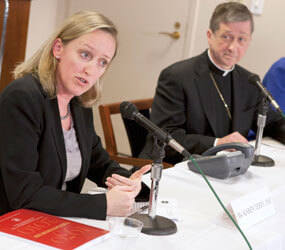 WASHINGTON – Although a new report on the causes and context of child sexual abuse by Catholic clergy says it is primarily a historical problem, the church must guard against complacency, two key figures in the release of the report said at a Washington news conference.

“There is no room for fatigue or feeling that people have heard enough when it comes to efforts to protect children,” said Bishop Blasé J. Cupich of Spokane, Wash., chairman of the U.S. bishops’ Committee on the Protection of Children and Young People.

Diane Knight, a retired Milwaukee social worker who chairs the all-lay National Review Board, said the report’s findings that the church’s actions since 2002 have been “effective in preventing further acts of abuse” should in no way “lull us as a church into complacency.”

“There will always be adults who are attracted to children in society and in the church,” Knight said. “Thus, we must always be on guard and do all that is possible to prevent sexual abuse.”

The two spoke May 18 following the release of a report by the John Jay College of Criminal Justice of the City University of New York on “The Causes and Context of Sexual Abuse of Minors by Catholic Priests in the United States, 1950-2010.” The report was commissioned by the National Review Board as part of its mandate under the bishops’ 2002 “Charter for the Protection of Children and Young People.”

They were joined at an afternoon news conference in the headquarters of the U.S. Conference of Catholic Bishops by Karen Terry, principal investigator for the John Jay study.

“The problem of sexual abuse of minors by Catholic priests in the United States is largely historical, and the bulk of cases occurred decades ago,” Terry said.

But, she added, “the vulnerability to abuse remains a risk in any organization where adults form mentoring and nurturing relationships with minors.”

In response to a question, Terry stressed that the report was prepared independently by the John Jay researchers, without any influence on the findings from the bishops or the National Review Board.

“We did the work, we did the writing, we came to the conclusions,” she said.