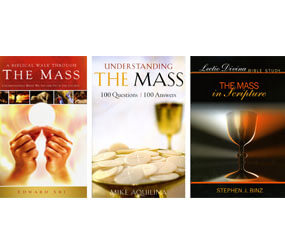 WASHINGTON – As Catholics look toward Nov. 27, when the new edition of the Roman Missal goes into use in the United States, there is no lack of resources to help them prepare for the new sound and feel of the liturgy.

Dozens of books and brochures have been published or are in the works, along with many DVDS and audiotapes aimed at specific audiences – from priests to teens to elementary school students.

But how can average Catholics know what the best resources are for their particular circumstances?

Father Richard Hilgartner, executive director of the U.S. Conference of Catholic Bishops’ Secretariat on Divine Worship and a priest of the Archdiocese of Baltimore, advises people to look to their pastors, diocesan worship offices or Catholic bookstores for recommendations.

“Anything will ultimately be helpful in some way,” he told Catholic News Service. “But some materials are more targeted at different age groups and audiences.”

He does not recommend that Catholics get their information about implementation of the new missal exclusively from the blogosphere, however.

Much of the liturgical information on popular Catholic blogs is “not fact but opinion,” he said. “And it is hard to discern what is helpful.”

Some of the resources are designed to work best in an adult religious education or small-group faith formation program.

Ascension Press, for example, has released “A Biblical Walk Through the Mass,” a five-part DVD series, book and workbook, along with a 20-page “Guide to the New Translation of the Mass,” which includes a pull-out reference card detailing the new responses by the people at various parts of the Mass.

“Perhaps more than any other time in recent history, people’s attention will be focused on the Mass,” said Catholic theologian Edward Sri, who wrote “A Biblical Walk Through the Mass” and the briefer guide. “This is an excellent opportunity for catechesis and faith formation.”

“The Essential Guide to Catholic Prayer and the Mass,” written by Catholic columnist Mary DeTurris Poust and published by Alpha Books, has a similar goal.

In addition to describing the upcoming Mass changes, it “offers devoted Catholics a way to explore prayer styles never been considered, and non-Catholics or Catholics on the edge a look into a world that can seem mysterious and intimidating,” according to a news release about the book.

Among other new books aimed primarily at adult Catholics are: “Understanding the Mass: 100 Questions, 100 Answers,” written by Mike Aquilina, executive vice president of the St. Paul Center for Biblical Theology, and published by Servant Books; “The Mass in Scripture” by Catholic biblical scholar Stephen J. Binz and published by Our Sunday Visitor; and “Mass Revision: How the Liturgy Is Changing and What It Means for You” by Catholic author Jimmy Akin and published by Catholic Answers.

That does not mean there aren’t ample resources available for other ages.

Life Teen, the Arizona-based national program for Catholic teenagers, recently introduced “Word for Word,” a book and DVD designed to update high school students, middle schoolers and their parents about the coming changes.

For younger children, Liturgy Training Publications has published “What’s New About the Mass” by Maureen Kelly for third- to seventh-graders with an accompanying handbook for teachers and catechists. Liguori Publications has a four-page brochure called “Going to Mass with Roman Missal” by Father Joe Weiss, explaining the upcoming changes in simple language.

Many of them also are offering preparatory materials on the missal through special websites. The bishops’ divine worship secretariat also has a variety of resources available at www.usccb.org/romanmissal.

Each publisher has a slightly different emphasis, however, Father Hilgartner said. Liturgy Training Publications and Liturgical Press are focusing on catechetical resources and resources for priests, he said, while Magnificat has an emphasis on personal devotional material and World Library Publications has a special interest in hymnals and other musical aids for worship.

But because the USCCB is also a publisher, in order to avoid any appearance of a conflict of interest, the divine worship secretariat is making no recommendations for specific resources on the missal.

“Just check the publishers you usually check with,” Father Hilgartner said. “Most of them have stepped up.”