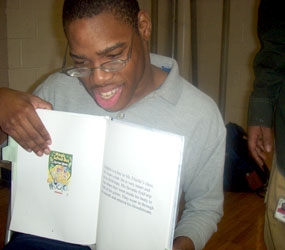 Like many of his classmates at St. Elizabeth School, Inc., in northeast Baltimore, however, Jordan is a published author. With the aid of a computer, Jordan read his work to classmates, parents and teachers at The Author’s Tea, a March 5 event at the school.

“When I grow up, I want to be a bus driver,” said Jordan, who has cerebral palsy.

Throughout St. Elizabeth, a school for special needs students on the middle or high school level that is supported by the Sisters of St. Francis of Assisi, emotions ran high among families as their children read from their books.

Writing teacher Ann Marie Deigelman spearheaded the project last year and watched as students who once struggled to communicate found comfort in the written word.

Ms. Deigelman encouraged students to choose a subject they love. They researched, wrote and edited their stories, which were sent to a publisher in Kansas. When the finished books arrived in boxes, excitement grew among the students.

“You can just see their self-esteem grow, because they have such pride in what they’ve done,” said Christine Manlove, the school’s executive director and principal.

Last year’s Author’s Tea was such a success that students returned in the fall eager to start their new books. Even though Ms. Deigelman has worked with the students each day on their books, The Author’s Tea proved to be emotional.

“I think I went home last year and had emotional issues that whole day,” she said. “You go home every day and try to figure out how to make things better tomorrow.”

Barrie Avery, 14, entered St. Elizabeth this school year and started a Lego club. His passion for the blocks led him to research other enthusiasts of the beloved toy.

“It has a legacy for millions of people,” Barrie said, while holding a copy of his book, “Lego History,” that featured his photo on the cover. “This is exciting.”

Parents like Gail Weingram leaned in close to hear the stories of their children.

Her son Matthew has Fragile X Syndrome, a genetic condition that causes various impairments. Last year, he wrote about cartoon character Ben 10, this year he turned his focus to comic book character Wolverine.

“You can see the change, just from last year,” Mrs. Weingram said of her son’s writing. “The level of sophistication is incredible,”.

Lives, parents said, are being changed daily at St. Elizabeth, thanks to the writing project.

“We’re just blessed,” said Mrs. Patrick, a Mercy High alumnus who pursued a career in special education after the birth of her son Jordan. “He’s found a home here.”