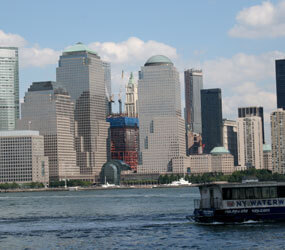 ORADELL, N.J. – Sitting in his office at St. Joseph Parish in Oradell on a warm August afternoon, Father Tom Iwanowski became emotional as he recounted his memories from Sept. 11, 2001.

But it wasn’t the events of the cataclysmic date itself that brought him to tears; rather, it was an unexpected encounter with a woman in 2006, who gently knocked on the door of Our Lady of Czestochowa, the parish in Jersey City where he had served.

Five years after the terrorist attacks, she had come to the Jersey City parish to express her heartfelt gratitude. The woman had been in lower Manhattan that Sept. 11 and had been transported across the Hudson River, along with hundreds of others, by ferry.

During the ensuing chaos, she wandered to Our Lady of Czestochowa, which is located just four blocks west of the waterfront. Dazed and afraid, she went to the parish rectory and asked to use the phone so she could contact her family.

“She came back to thank us,” Father Iwanowski said. “She wanted to say ‘thank you’ for letting her use the phone. You never know how a small act of goodness will ripple through the lives of others. Many people were drawn to our church that day. What else could we do but come to God and cling to one another?”

For Jersey City residents living near Our Lady of Czestochowa, the absence of the twin towers of the World Trade Center – which had been a dominant point of reference on the horizon – is a constant, sad reminder of the brutal murder of 3,000 innocent people, including more than 670 from New Jersey.

Father Iwanowski served as the pastor of Our Lady of Czestochowa for 14 years. Three men connected with the parish were killed when the twin towers collapsed: a Cantor Fitzgerald employee; a Port Authority policeman; and a businessman who had relocated to Jersey City from Hong Kong. The priest was installed as the pastor of St. Joseph Parish July 1.

Sifting through his 9/11 experiences, he revealed memories still clearly etched in his mind – fragments of commonplace activities that would have been forgotten on any other day. On that Tuesday morning, Father Iwanowski was taking his car to a nearby service station for routine maintenance. As he was driving to his appointment, he saw mobs of people running toward the river.

“I knew something horrible had happened,” he recalled. “As I listened to the radio and heard that a second plane hit the South Tower, everyone realized this was no accident. I turned my car around. I knew I had to get back to the parish.”

The first thing he did once he returned to Our Lady of Czestochowa was to open the church doors. He then went to the parish school to meet with teachers. Fear already had gripped the young

students. The decision was made to lock down the school, and Father Iwanowski visited each classroom.

By the time both towers had crumbled, around 10:30 a.m., he realized the church would now have to serve as a place of refuge, for those in the neighborhood as well as anyone who was being shuttled

across the river. He sent the parish staff to buy food. After celebrating noon Mass, he ran to the waterfront to observe the dreadful sights.

“As the afternoon progressed, people came to seek consolation in church and comfort in the rest area we had so quickly set up,” Father Iwanowski said. “We had workers from Manhattan. We had residents from Battery Park City. We had folks from a hotel in Manhattan who arrived in their sleepwear. We had 22 students from the High School of Economics and Finance. The students literally had no idea where they were. They ran for their lives and headed for the river.”

By 9:30 p.m., Father Iwanowski was sitting in his quarters – alone, physically exhausted and emotionally drained.

“The spirit of God was working in me and the parish staff members that day,” he said. “God used us to be the light in the darkness. We simply reacted to the situation. Somehow we knew what we had to do. It was instinctive.

“How could anyone be prepared for such an event?” he asked. “The only thing you can do is be open to God. There’s a sense of prayerfulness; you allow the Holy Spirit to guide you so that you can do something to answer the prayers of others.”

“In this world, there are ripples of evil – like the circle of small waves that form when you throw a rock into a lake,” he said. “But there are also ripples of hope and goodness. Good Friday is not the end. We have hope, we have strength, we have one another and we have God. We can still sing out, ‘Christ, Be Our Light.’ ”