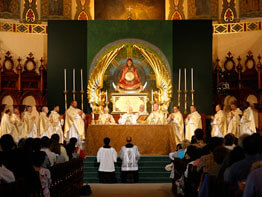 CHICAGO – Nine years of prayer, work and faith culminated May 31 when curtains parted in the sanctuary of St. Stanislaus Kostka Church in Chicago to reveal an iconic monstrance of Our Lady of the Sign, Ark of Mercy.

It’s just the beginning, however, of what will be the Sanctuary of Divine Mercy, the official shrine to the Divine Mercy devotion in Chicago.

Cardinal Francis E. George of Chicago was on hand to celebrate Mass and bless the new 9-foot, hand-carved and painted monstrance featuring Mary atop a gold-leaf decorated ark flanked by two kneeling angels, also in gold leaf, whose wings extend to shelter her. The 12-inch host, which had to be specially made for the monstrance, is encased in Mary’s center.

Mercy Festival, a week of daily 24-hour eucharistic adoration, began after the Mass. Approximately 1,500 people packed the church and its balconies to see the monstrance.

This intricately detailed and symbol-laden monstrance is believed to be the world’s largest and was created by Polish sculptor Stefan Niedorezo. It was paid for by anonymous donations and royalties from the sale of “A Mother’s Plea,” the memoirs of Resurrectionist Father Anthony Bus, St. Stanislaus Kostka’s pastor.

“Everything that you see is unique,” Oscar Delgado, one of the project’s organizers, said about the monstrance in an interview with the Catholic New World, Chicago archdiocesan newspaper.

Each part of the icon has meaning; this includes how Mary is positioned. She’s sculpted as though she is exhaling, with her arms extended outward. It evokes a sense of calm when one looks at her, because she’s in a relaxed pose, making it easier to pray, said Father Bus, in an interview prior to the unveiling.

References to Mary in Scripture are inscribed upon her clothes, and other symbolism is worked into the design.

The Divine Mercy devotion was begun in the late 1930s by St. Faustina Kowalska, a Polish nun who said she had a vision of Jesus in which he asked for devotions to divine mercy on the Sunday after Easter.

For Malgorzata Sawczuk, working on the project was a spiritual experience. A Polish conservator, she applied the gilding and paint by hand to the iconic monstrance.

The studio where she worked became a “kind of holy space … a space of true light and energy that always emanate from the world-class works of sacred art,” she said.

It became “a space of living faith emanating from the people I was to meet there every day, so deeply engaged in the hope of creating something beautiful for God – an iconic monstrance of Mary, the holy mother of God,” Ms. Sawczuk wrote in an e-mail.

“It was also an opportunity to bring alive some ancient painting techniques, almost extinct today,” she added.

The entire project for the monstrance and the future sanctuary – which will be built between the church and school – came out of a message from Mary that Father Bus writes about in “A Mother’s Plea.” He said Mary asked him to dedicate the parish to her; at the time St. Stanislaus was in poor shape. The building was in disrepair and the neighborhood poor.

In the early 1900s, St. Stanislaus was believed to be the largest parish in the country, boasting more than 40,000 families as members. Many neighboring parishes began out of a need to accommodate the large population.

Founded in 1867, the parish was the first in the archdiocese with an apostolic mission to Polish immigrants. Today, the parish continues to offer Mass in Polish but offers it in English and Spanish as well and has seen an influx of Hispanic immigrants in recent decades. And it hopes to serve many more through the shrine to Divine Mercy.

Architectural drawings for the sanctuary buildings are complete. But before building begins, the parish must raise $20 million.

“We’re walking on faith,” said Father Bus in a recent interview with the Catholic New World.

Elizabeth Murray came from St. Vincent Ferrer Parish in River Forest to see the unveiling of the monstrance. She said she’s moved by what is going on at St. Stanislaus and the work of Father Bus.

“I think he’s encouraging people to have a devotion to the Divine Mercy. It’s inspiring,” said Ms. Murray.

Michael Kendall sees the monstrance and sanctuary as part of a reawakening in the Catholic Church since the Second Vatican Council.

“It’s my hope that in 200 or 300 years that historians will look back at this time of awakening in the Catholic Church and say St. Stanislaus Kostka had a significant role to play in bringing about this great Catholic awakening,” said Mr. Kendall, who took a 50 percent pay cut to come and work part time as director of mission advancement for the Sanctuary of the Divine Mercy.

He said he also hopes that people drawn to the monstrance will see that true beauty lies with Jesus in the Eucharist and that Christ can heal their pain.