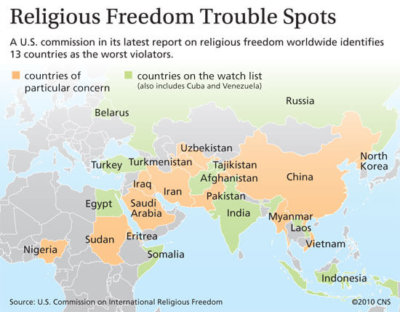 In releasing its annual report April 29 in Washington, the U.S. Commission on International Religious Freedom cited Nigeria as a country where violence is tolerated by the government, which it said allows Christian and Muslim perpetrators to continue their attacks unhindered.

“Until the Nigerian government recognizes there is a sectarian aspect to this conflict and violence, it will not be solved,” said Leonard A. Leo, the commission chairman.

The commission recommended – for the second year in a row – that the United States list Africa’s most populous nation as a country of particular concern, the most serious on a three-tier rating system. Nigeria is one of the 13 countries recommended for such a rating.

The Department of State has placed eight countries on the list but has excluded Nigeria from it.

By rating a country as one of particular concern, State Department officials would be permitted under the International Religious Freedom Act to undertake diplomatic actions or economic sanctions to encourage countries to improve religious freedom.

Nigeria’s recent violence prompted commission members to visit the country three times during the past year, most recently in late March.

Commission member Don Argue said that in discussions with Nigerian legislators from the region around Jos, where violence occurred in January and March, they acknowledged that the violence has deep religious roots.

“Yes, there are issues – economic issues, unemployment, ethnic, land ownership – all of these things come into play,” said Argue, who has visited Nigeria twice since July. “But the question is why has the frustration been vented in religious persecution?”

Elizabeth H. Prodromou, commission vice chairwoman, said the group’s inquiries have shown that religious and socio-economic issues are intertwined in the culture of Nigeria, requiring that the government address both if the violence is to be resolved.

Other concerns cited by the commission include the adoption of Shariah, Islamic law, in 13 Nigerian states and the insertion of religion into the conflict by outside parties. Prodromou identified the funding of school and mosque construction by Saudi Arabia, Pakistan and Libya as reason for concern because the educational material used in the schools encourages violence against non-Muslims.

Several commission members held out a glimmer of hope that things would change in Nigeria with the newly established U.S.-Nigeria Binational Commission, which will focus on economic and diplomatic initiatives.

The religious freedom report also criticized President Barack Obama for failing to appoint an ambassador-at-large for international religious freedom, as called for under the law that mandated religious freedom be an aim of U.S. diplomacy. The position has remained unfilled since John Hanford left Jan. 2, 2009.

Overall, there was no change from the commission’s 2009 list of 13 countries singled out for particular concern for failing to protect religious freedom. In addition to Nigeria, the commission named China, Eritrea, Iran, Iraq, Myanmar, North Korea, Pakistan, Saudi Arabia, Sudan, Turkmenistan, Uzbekistan and Vietnam to that category.

Three other countries – Bangladesh, Kazakhstan and Sri Lanka – also deserve to be monitored, the report said.

The commission pointed to Nigeria as a country where violence among Christians and Muslims has left as many as 12,000 dead since 1999. The report said conditions in Nigeria are worsening, allowing “for the proliferation of extremist ideology and terrorism.”

A recent Pew Forum report on Islam and Christianity in sub-Saharan Africa showed that, of 19 countries surveyed, Nigeria and Rwanda had the highest percentage of the general population – 58 percent – who believed that conflict between religious groups is a very big problem in their country.