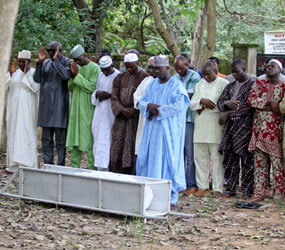 LAGOS, Nigeria – Lagos Cardinal Anthony Olubunmi Okogie urged President Goodluck Jonathan to use all security and intelligence networks at his disposal to unmask the sponsors of the Boko Haram sect and deal with them decisively.

Cardinal Okogie’s advice followed the late-August bombing of the United Nations building in Abuja in which at least 23 people died.

The extremist Islamic sect, which has a somewhat undefined leadership and structure, also bombed various public buildings in the northern Nigeria towns of Maiduguri, Kano, Kaduna and Jos, as well as the Nigerian Police Force national headquarters, where several hundred people were killed.

The group says it is fighting against Western culture and education, which it claims negates its beliefs.

The cardinal said the continuous spate of mayhem being unleashed on the nation by members of the sect was becoming a matter of national embarrassment capable of disintegrating the nation if not properly checked. His remarks were released in a statement Sept. 1.

He said he wondered why the president seemed to treat the Boko Haram issue with kid gloves despite the monumental loss of lives and property it had unleashed on Nigerians over time.

The president “must summon the political will to address the growing state of insecurity in the land before it becomes too late,” he said.

“Nigerians are tired of tolerating this unwarranted state of terrorism in the land,” he said. “So many innocent lives have been lost and what have our security agents got to show for it? The time has come for President Jonathan to show that he is in charge.

“It is obvious that some people are out to make the country ungovernable for him,” said Cardinal Okogie. “He must identify them and make them face the music.’’