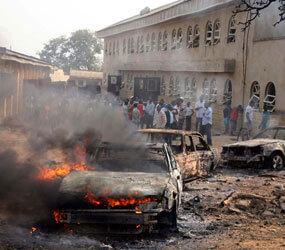 LAGOS, Nigeria – The Nigerian bishops’ conference described the Christmas church bombings as the equivalent of war and declared Dec. 31 a day of fasting and prayer to ask God’s forgiveness for the acts.

“Pray for Nigeria in distress and pray for peace in our nation and pray for good governance,” said the Dec. 30 statement signed by Archbishop Felix Alaba Job of Ibadan, president of the Catholic Bishops’ Conference of Nigeria.

The Islamic extremist group Boko Haram took credit for the Christmas bombings outside that left more than 40 people dead.

“This group has apparently declared war on Nigeria and, at times of war, nations are calling on their reserves. It is apparent that, if we depend only on our available active security agents, we shall not make much progress,” the bishops’ statement said.

It asked Nigerian President Goodluck Jonathan “to recall the retired experts in criminology and employ foreign experts in this field to assist the active security agents to put an immediate end to the Boko Haram menace.”

One of the churches targeted on Christmas was St. Theresa Catholic Church in Madalla, just outside of Abuja.

On Dec. 28, six children and an adult were injured in the bombing of an Islamic school in Sapele. No one has claimed responsibility for that attack, in which the homemade bomb was lobbed from a passing vehicle.

After the incidents, individual bishops had urged the government to get control of security.

Speaking at the dedication of St. Peter Church in Awka, the cardinal said the spate of bombings in a four-day period makes people wonder “what the government is doing with our money. If they cannot protect the lives of its citizens, then why do we have a government?”

He said it seemed that “anybody can just do anything they like and go scot free.”

“People have identified themselves as members of Boko Haram, taking credit for bombings; still, nothing is done to them. That means the killings should continue,” he said.

“I do not believe violence can cure violence, but we must try to halt it there. This is what you get when people are not ready to rule, but are just there to embezzle the money. You cannot keep playing with people’s lives,” he warned.

In Abuja, Archbishop John Olorunfemi Onaiyekan said the quick arrest of those responsible for the deaths would renew people’s confidence in the government and its ability to guarantee their security.

He urged Nigerian Muslim leaders to assist security agents in exposing those responsible, “as they are giving Islam a bad name.’’ He also told Nigerians not to be afraid to expose those responsible, so as to bring them to justice before they kill more people.

He also called for intense prayers for God’s intervention to end “this national tragedy.’’

Nigeria’s population is almost evenly divided between Christians and Muslims, with Christians dominant in the South and Muslims in the North.

Jonathan has met with Muslim and Christian leaders in an attempt to restore calm. The Christian Association of Nigeria, which includes Catholics, said in an open letter to Jonathan that the Christmas bombings were “a declaration of war on Christians and Nigeria as an entity.”

One of the country’s leading Muslim clerics, the sultan of Sokoto, Muhammad Sa’ad Abubakar III, said after his Dec. 27 meeting with Jonathan that the violence was not religious in nature.

“It is a conflict between evil people and good people,” he said, adding that “the good people must come together to defeat the evil ones.”

Catholic Bishop Mathew Hassan Kukah of Sokoto urged governments at all levels to rise to the security challenge. He said if religious and government leaders did not act quickly, “this threat will no doubt continue to divide us, as those perpetrators of this act are already thinking of breaking the country.”