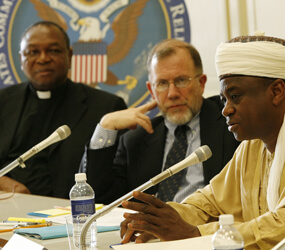 WASHINGTON – A Nigerian Catholic archbishop and the sultan of Sokoto said the so-called religious violence between Muslims and Christians in Nigeria is not, in fact, about religion.

The conflicts are not about the nature of God or doctrinal issues; the violence is not religious, said Archbishop John Olorunfemi Onaiyekan of Abuja. Nigerians fight over who wins or loses elections and who can and cannot get land to build a church, he said.

These “are matters between groups with special interests,” he said April 22 during a meeting on Capitol Hill with members of the U.S. Commission on International Religious Freedom. The commission, a watchdog group, was to release a comprehensive report on violence in Nigeria May 10. Because of the violence, defined by media and others around the world as religious violence, the commission has listed Nigeria on a “watch list” of countries where conditions of religious freedom require close monitoring.

But Archbishop Onaiyekan attributed the conflicts, which have contributed to violent riots, deaths, and mosque and church burnings, to the manipulation, gross impunity and corruption of politicians.

“Nigerians take religion very seriously” and because of this passion corrupt politicians easily manipulate and provoke Nigerians to be violent, he said. The archbishop likened the situation in Nigeria to conflicts in the Holy Land, which are often political but are seen as sectarian.

“If we can manage our communities with a minimum of good order … a lot of this so-called religious violence” will disappear, said Archbishop Onaiyekan.

Sultan Muhammad Sa’ad Abubakar, head of the Nigerian National Supreme Council for Islamic Affairs, made similar statements. The leaders of the two main religions in Africa’s most populous country said poverty and jobless youths contribute to the violence in Nigeria.

When asked what they do when manipulative politicians attend their religious services, the archbishop and sultan agreed that their roles were not to single out the criminals or corrupt politicians. Their churches and mosques are for praying, the religious leaders said, and the government and police must enforce the law.

The role of religious leaders is to “liberate religion from these issues” of violence and “remove the mask” that blames religion as the cause of the problems, said Archbishop Onaiyekan.

However, when asked about the implementation of Shariah, or Islamic law, in northern Nigeria, their views differed.

The sultan said Shariah, adopted into civil law in northern Nigeria in 1999, does not have an effect on Christian Nigerians.

For example, he said, women are seen everywhere in the North wearing jeans, riding around on motorcycles and without their heads covered. Those women are not Muslim, he said. He likened Shariah to zoning ordinances; for example, in some places alcohol cannot be sold. Shariah prohibits the consumption and sale of alcohol.

Archbishop Onaiyekan said Shariah has been around since before he was a young man, but it became an issue when it was incorporated into civil law 10 years ago.

He said he has heard of Christians who have had to close down their bars and relocate because of Shariah. The owner of a bar, for example, “is not able to exercise his freedom because of where he lives,” he said.