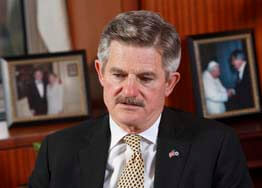 WASHINGTON – The ongoing war in Iraq is controversial, but the warriors fighting it are not, said Jim Nicholson, who recently tendered his resignation as the U.S. secretary of Veterans Affairs. “The warriors are beloved.”
His role as head of the nation’s second largest Cabinet department since January 2005 has been “to continue to provide world-class health care and benefits and memorial services to our nation’s veterans,” he said.
Mr. Nicholson, a Catholic and former ambassador to the Holy See, made the comments in an interview with Catholic News Service at his office at VA headquarters in Washington in June.
At a July 17 press conference, Mr. Nicholson, who turns 70 next February, said he would remain on the job until Oct. 1. He said he wants to return to the private sector.
He practiced law in Denver and was a successful real estate developer before he became chairman of the Republican National Committee and later an ambassador.
In the interview with CNS, Nicholson talked about criticism of VA care of veterans wounded in Iraq and Afghanistan and steps President George W. Bush and his administration have taken to respond to it.
Even though Walter Reed Army Hospital in Washington is run by the Defense Department and is not a VA facility, President Bush took “decisive action” in response to an expose in The Washington Post about a run-down outpatient building, Mr. Nicholson said.
The president convened a task force to find gaps in existing VA and Defense Department health care services, “and then set in motion the steps to fill the gaps,” said Mr. Nicholson, whom President Bush named to chair it. The panel came up with recommendations in 45 days.
A separate presidential panel is looking at reports that veterans are experiencing problems in getting disability payments and care.
Some of the Nicholson task-force recommendations already have been implemented, including a Defense Department-VA agreement to share case management of those receiving care: Patients continue to have the same case managers when they go from a Defense Department facility to VA care after being discharged from the military.
The VA’s 1,400-plus hospitals and clinics see 1 million patients a week, he said.
The country being at war “has necessitated adjustments” in how the VA serves the “young heroes” discharged from the military and looking to the VA “for their perpetual recuperation and care,” Mr. Nicholson said.
Brain injury is one of the signature injuries of the Iraq War because of the explosives used against the troops, Mr. Nicholson noted.
“Any returnee from the global war on terror” is now screened “for traumatic brain injury or any other kind of brain injury, be it moderate or mild,” Mr. Nicholson said. Such screening is one of the task-force recommendations that was put in place.
All veterans are also now screened for post-traumatic stress syndrome, which “entails greatly enlarging our mental health delivery of services,” he added.
Mr. Nicholson believes the VA health care system is the best in the United States. “That’s not just a boast of a proud secretary, but there are a lot of objective data that are used to assess and evaluate medical care that state that,” he said.
Recent stories in Time magazine and U.S. News & World Report give VA medical care high marks.
In a July 17 interview with The Washington Post, Mr. Nicholson said he was not asked to step down. He said his yearning to get back into business “is strong” and he felt it was “a good time – if ever there is a good time – to leave the VA.”
He told CNS that before he took the VA post he had had no dealings with the department, but was well-briefed. But his own military experience was “a great background for this job, the mission of this organization, which is to take care of veterans on behalf of a grateful American people.”
A 1961 graduate of the U.S. Military Academy at West Point, N.Y., he served eight years on active duty in Vietnam as a paratrooper and Army Ranger. He earned a Bronze Star Medal, given for heroic service. He spent 22 years in the Army Reserve, retiring as a full colonel.
If his tenure at the VA seems tumultuous, Mr. Nicholson’s arrival there sounds like a whirlwind.
“I signed over the embassy one day in Rome and got on a plane and flew here and was sworn in this job the next day,” he told CNS.
Any mention of his three and a half years in Rome makes him melancholy, he said, because he “enjoyed every day of it.”
Mr. Nicholson has called the post in Rome a “gift that God gave me” and said it was an enriching experience that deepened his faith.
“A cradle Catholic” who grew up in rural Iowa, he said his family was hard up. But “my mom used to say to us if you kids will work hard and study hard and, she always said, pray hard, you’ll do just fine in this country, and she was right,” he said.
“All seven of us went to college and four of us have graduate degrees, so prayer has been really a part of my life for as long as I can remember,” Mr. Nicholson said.
“I always seem to have something or somebody to pray for,” he added, including a nephew who spent 16 months in Afghanistan commanding a brigade. He returned home safely in June.
“I prayed for him every day he was there,” he said.