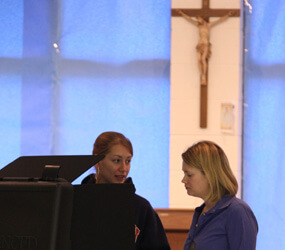 WASHINGTON – So, is “Christian America” in a state of “decline and fall,” as Newsweek editor Jon Meacham suggested in a much-talked-about cover story in his magazine’s April 13 issue?

Mr. Meacham pointed to a finding of the American Religious Identification Survey, issued in March, that shows the percentage of Americans who claim no religion has nearly doubled from 8.2 percent in 1990 to 15 percent in 2008. He contended that Christians are “less of a force in U.S. politics and culture than at any other time in recent memory.”

Some say that is why Republicans, long a natural ally of the Christian right, lost both houses of Congress in the 2006 elections. Their numbers shrank further in the 2008 elections, when the GOP presidential candidate, U.S. Sen. John McCain of Arizona, took a drubbing in both the popular vote and the Electoral College vote by Barack Obama.

Others point to James Dobson, one of the more relentless advocates of a Christian political agenda, and his decision to step down as the head of Focus on the Family, the Colorado organization he founded. Dobson, however, has countered media accounts he has given up on the “culture wars,” saying he has by no means “retired from the public square.”

Observers claim that the clergy sex abuse scandal that erupted in 2002 damaged the church’s moral authority and, for a time, weakened its impact on policy.

During his April 15 installation Mass, New York’s new archbishop, Timothy M. Dolan, alluded in his homily to the challenge church leaders can face in getting their message out, with “shortages and cutbacks, people mad at the church or even leaving her, and our seeming inability to get the Gospel message credibly out there. Are we not at times perhaps like those two dejected disciples on the road to Emmaus?”

But can survey figures like those Mr. Meacham cites be translated to measure the effectiveness of any religious organization’s public policy agenda?

“I’m not sure. It’s getting harder and harder to say, for example, that there is such a thing as a Catholic vote,” noted Mary Gautier, a senior research fellow at the Center for Applied Research in the Apostolate on the campus of Georgetown University in Washington.

Ms. Manning said a 2002 study indicated that “the religious right had been so successful at affiliating Christianity with conservatism that some Christians were disaffiliating. They wanted to have no religious affiliation rather than call themselves Christian.”

Also subject to change is the self-definition of Christianity. “Although many people claim to be Christian, many of them don’t know a lot about their religion,” said Ms. Manning, citing studies conducted by author Christian Smith.

“When you ask them about specific tenets of their faith, they really couldn’t tell you. … Their understanding of who God is … this notion of God as someone good, as someone who’s up there and loves you and cares for you and will feed you but doesn’t put many demands on you” has been described by Smith as “moral therapeutic deism,” Manning said. “Does that kind of belief system constitute genuine Christianity?”

A Princeton Survey Research Associates International poll commissioned by Newsweek indicates broad gaps in thinking between evangelical Protestants, the focus of much of Mr. Meacham’s article, and Catholics.

Asked how much of a factor their religion was in their political affiliation, a plurality of Catholics, 46 percent, said it was no influence; 48 percent of evangelical Protestants said it was a major influence.

“According to the Pew religious landscape study from a year or so ago and other studies similar to that, Catholics are more likely to stay Catholic, to stay self-identified Catholic, than most any other group. They’re more likely to stay Catholic than Presbyterians to stay Presbyterian, and Lutherans to stay Lutheran and so forth,” said Ms. Gautier.

Her colleague, Mark Gray, who is in charge of CARA’s telephone polls, said the frequency of attendance at church services is a more telling marker than denominational identification. And, since CARA started polling on the issue in 2000, the percentage of Catholics attending Mass weekly has stayed stable – meaning the number has increased as the U.S. Catholic population has increased.

Mr. Gray said, “We’re outliers. We’re exceptional when you look at the rest of the democratic industrialized world … than any similar country” in terms of religiosity. “It goes all the way back to (Alexis) de Tocqueville” in his 1830s’ observations on American democracy, he added.

The American Religious Identification Survey showed a surprisingly high percentage of atheists who attend church services, and the increase in the percentage of Americans who say they no longer identify with a religion has been “way overplayed,” Mr. Gray said.

To declare a decline in religiosity based on a near doubling “to the low double digits” of Americans who claim no religious affiliation is “crazy,” he added. “That Newsweek cover was crazy.”