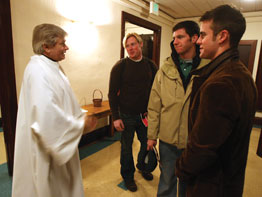 There is a sense of sadness and apprehension that washes over most parents as they drop their children off for college.

Who’s going to watch or feed them and make sure they get to class on time? Better yet, who’s going to keep their souls clean when invitations to raucous parties become the norm?

In the case of many public colleges, it’s a moment when Catholics scurry for the campus map to locate the nearest church. What they find are Newman Centers typically located right off campus and a chaplain ready to reach out to their children as a spiritual guide and friend.

“I’ll always have a parent look at me and say, ‘keep an eye on my son,’” said Father Thomas Ryan, the chaplain at The Johns Hopkins University in Baltimore.

Four of the public colleges inside the Archdiocese of Baltimore have a Newman Center with chaplains. Father Edward S. Hendricks has been at Frostburg State University for 14 years, making him the longest-tenured chaplain and the perfect person to be the director of campus ministry for the archdiocese.

“As chaplains, we are more and more immersed in everyday life on campus, which is great,” Father Hendricks said. “You have to earn your way there. It’s not going to happen the moment when you get there, but it happens over time.”

When he was tapped to be the Johns Hopkins chaplain in 2002, Father Ryan was hoping to appeal to Catholics on campus and further their Sacramental life, not knowing that the popularity of his outreach would extend eventually to Hopkins’ satellite campuses.

In the four years he has worked with Catonsville’s University of Maryland Baltimore County students, Father Richard A. Gray has seen Mass attendance rise from 50 a week to 80 to 90 students.

“We offer an avenue for students to practice their catholic faith once they are not forced to go to Mass by their parents,” Father Gray said.

Students can also be baptized, confirmed and have the sacrament of reconciliation among many other services.

Towson University’s Father T. Austin Murphy enjoys a strong relationship with his students thanks to an effort to engage them in the social norms of the day. He routinely exchanges e-mails with Newman Center regulars and keeps a popular page on the popular Web site Facebook.

“A year ago, I didn’t know what Facebook was,” he said. “Now, I have all these friends and we use it to promote events. That gets a lot of people going. The thing with the college kids, and particularly young people, is it’s all about networking with their friends.”

Most of the centers have Newman Nights, where regulars drop-in for social activities.

Each has built a strong individual community through their archdiocesan-funded outreaches. Students routinely participate in social justice activities and become the best evangelizers for the centers.

“I always have to remember when I’m out that I’m representing Newman,” said Towson senior Laura Vesely, who is also the president of the Newman Club on campus.

Father Hendricks said there are at least two new Catholics a year and about three to eight confirmations a year at Frostburg.

“Some students come from a Catholic background but they very often don’t go to church,” he said. “They come out of curiosity. They’re investigating their faith, and it’s because of their peers. In a lot of cases, fellow students have more influence on them coming to church than I do.”

Father Ryan said Johns Hopkins has a strong undercurrent of faith on campus, with 21 different traditions represented. During any given week, 150 to 200 students will attend the two Masses at the school, he added.

For many years, UMBC was regarded as a commuter school with little campus life. The school has sought to change that perception by increasing the residence halls to house the current 4,000 students living on campus.

Father Gray, who is part-time at UMBC while helping the Hispanic ministry for Harford County’s St. Francis de Sales and St. Margaret, said UMBC allows him to reach people on the ground floor.

“I enjoy the kids who are mature in their faith who were lukewarm Catholics who discovered our ministry,” he said.

Just because students attend Mass, doesn’t mean they’re are on their best behavior. They face the same temptations of drugs, alcohol and sex many students do throughout their academic careers.

Not all temptations are in public, however. Many of the chaplains say there is a growing concern about the number of male students admitting they spend a large amount of time watching Internet pornography on the easily accessible campus networks.

“It’s becoming a real serious issue because it’s so available,” Father Hendricks said. “Because we’re on a public campus, there’s no filter. I think we’re seeing more and more of it.”

Some students are blocking themselves from normal social interaction, the priests say, because of large amounts of time on the Internet, through social networking sites like Facebook and Myspace as well as Instant Messengers.

The four chaplains routinely meet to discuss such concerns, but also share tips about trends that might make their way to another campus.

No matter what difficulties might arise, all agree they enjoy fostering the growth of the next generation of Catholics.

“I love it,” Father Ryan said. “There’s nothing quite like it.”