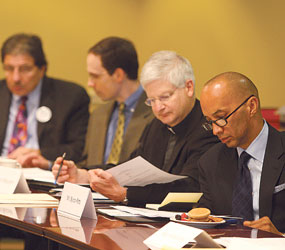 That’s why she agreed to be part of the newly created Archdiocese of Baltimore School Board, which gathered for the first time Jan. 10 at St. Mary’s Seminary in Roland Park.

“When you’re asked to do something absolutely essential, you say yes immediately,” said the interim president of the Institute of Notre Dame. “Our schools are superb and we have to find ways of keeping them going. It’s a huge project. I just hope we can organize well to do it.”

The 23-member board will oversee the implementation of Archbishop Edwin F. O’Brien’s Blue Ribbon Committee on Catholic Schools’ Strategic Plan, which was released in June 2010. Archbishop O’Brien will chair the board.

The board will also recommend policies for the archdiocesan school system and advise the archbishop and superintendent concerning advancement, finances, facilities and leadership matters affecting Catholic schools.

“It’s going to be four or five years to really get a structure in place,” the archbishop said. “We always have to have an archdiocese school board to keep us in check and to set ongoing goals and make sure we reach them.”

“They’re the best minds of goodwill we’re aware of,” the archbishop said. “We’ll inform them of what our school system is and what we hope it to be and get their help in reaching the goals we’d like to reach as spelled out by the Blue Ribbon Committee.”

Frank Bramble Sr., a member of the board of directors for Bank of America and past chair of the Blue Ribbon Committee, serves as the school board’s vice chairman.

“We think it’s an exciting moment today,” Bramble said before the Jan. 10 meeting. “It’s an accountability process. It’s part of the governance process and we’re just thrilled that we were able to attract so many talented people.”

To address declining enrollment, Archbishop O’Brien announced the closure of 13 schools last year. More than 60 percent of students from the closed schools returned to archdiocese classrooms for the 2010-11 school year.

The Blue Ribbon Committee met for more than a year to devise a strategic plan to revitalize the archdiocese school system. It offered 56 recommendations to improve Catholic education.

As its first meeting started, Archbishop O’Brien told the school board, “We are deadly serious on forwarding the findings of this Blue Ribbon Committee.”

“Other than that, we’re pretty much where we should be,” the archbishop told the new school board.