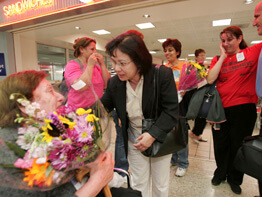 OAKLAND, Calif. – Their family home in Fallujah, Iraq, was shelled, burned and looted. They languished for two years in Istanbul, Turkey, within the cultural and vocational limbo accorded refugees who are waiting to be permanently resettled somewhere, sometime.
Now that Hana, Wafa and Sana Toma have found a permanent home in the Oakland Diocese with the help of Catholic Charities, they speak with a single voice: “We want to work. Now.”
Wafa and Sana Toma have spent their adult lives as educators – Wafa as an English grammar teacher at a technical institute and Sana as an elementary school instructor near Fallujah. Hana Toma worked for many years as a journalist covering culture and archaeology for a daily newspaper before becoming an Arabic/English translator at the Ministry of Culture in Baghdad, Iraq.
The three sisters arrived at the Oakland airport in late August with their 71-year-old mother, Samiya Bashir. Waiting to welcome them were their brother, Shamil Toma, his wife, Suha Yosif, and Dominican Sister Elisabeth Lang, director of Catholic Charities of the East Bay’s refugee resettlement program, which is serving as the family’s sponsor.
Their arrival marked the first time in 15 years that the separated family members have seen one another. Shamil Toma fled in 1993, paying a guide to lead him and a cousin through the mountains of northern Iraq to the Turkish border.
“I couldn’t leave the normal way with a passport because I was not allowed to leave the country since I had worked at a military factory,” the brother explained during an interview with The Catholic Voice, Oakland diocesan newspaper, at Catholic Charities offices. He and his wife are members of the Catholic Community of Pleasanton.
Toma spent a year in Istanbul before immigrating to Canada to stay with sponsoring relatives. In 2000 he was hired by a Fremont computer company as a senior test engineer.
The four-bedroom home in Dublin he shares with his wife and their two sons, Tom, 10, and Sam, 6, now also accommodates his mother and sisters. Sister Elisabeth, meanwhile, is working to help Bashir and her daughters find their own apartment.
The family members are gradually settling in to their new homeland. “We are glad to be here to see our brother. We are also glad to be in a safe place to live in peace,” said Wafa Toma.
To help pass the time while living in Turkey, Hana Toma volunteered as a home visitor for Istanbul Caritas.
She blinked back tears. “America is the reason for us to leave, yet America brought us here,” she said.
Their mother does not speak English, but she began wiping away her own tears as well. The terrible memories of Fallujah remain fresh for this lifelong resident of Iraq, said her daughter.
“It has been very difficult for her. She has been uprooted from everything in our culture,” said Hana Toma. “My mother, a stay-at-home housewife, told us so many times, ‘I’ll never leave my home to go to a place where I can’t speak Arabic to my neighbors.’“
The Tomas were one of three Catholic families in Fallujah, a city slightly smaller than Oakland. Despite their minority status, they had many good Muslim friends and neighbors.
The family drove the 40 miles to Baghdad to attend Mass at Our Lady of Peace Parish, one of many Catholic churches in a city which had between 200,000 and 300,000 Christians before the war. As many as one-third of them have since left Iraq.
In his efforts to get his relatives into the U.S., Shamil Toma was referred to the U.S. Conference of Catholic Bishops’ Migration and Refugee Services, which has a contract with the U.S. State Department to resettle refugees. The USCCB resettles nearly one-fourth of all refugees admitted to the U.S. annually through a network of more than 100 diocesan refugee resettlement programs, mostly local Catholic Charities offices.
Just days after the Toma family arrived, Catholic Charities of the East Bay welcomed two more refugee families from Iraq. Both families are Muslim.
One couple and their adult daughter, who has a degree in architecture, are living with an uncle in Lafayette. The other family – a couple and their four children – is living with relatives in Concord.
Sister Elisabeth said all three refugee families have an advantage because they have relatives in the local area who can help them deal with acculturation and provide emotional support as they make the adjustments to life in the U.S. She said she did not expect any more Iraqi refugee families to arrive in the area in the near future.