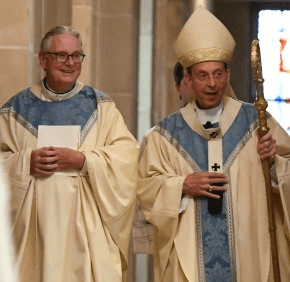 “That’s about as official as it gets,” said Baltimore Archbishop William E. Lori after Sulpician Father Phillip J. Brown signed a profession of faith and oath of fidelity to church teaching Oct. 6.

The action followed the liturgy of the word at Father Brown’s installation Mass at the Chapel of the Presentation of the Blessed Virgin Mary at St. Mary’s Seminary and University in Roland Park, where he has been serving as president-rector since July.

“I feel your support every day and it is deeply appreciated,” Father Brown told the archbishop after the Mass.

In his homily, Archbishop Lori, the main celebrant, referenced the first reading and St. Paul’s “harsh words to the Galatians,” who were “imagining they could find salvation by following the law rather than committing themselves in faith to Jesus Christ.”

Father Brown, the archbishop said, “will be no less unyielding than St. Paul in insisting on the centrality of Christ in our lives as priests and future priests” in scholarship as well as service.

“Our formation requires a spirit of adoration, cooperation and communion with Christ’s mysteries that leads to a deep and abiding dwelling of Christ in our persons,” Archbishop Lori said.

“My first passion in life was music,” he told the Catholic Review in an interview prior to his installation Mass.

He played the oboe, clarinet, saxophone and piano, and sang as well. He said that his love for music was sometimes at odds with his love for law, and the latter eventually won out.

“I wish it was more noble,” he joked. “I saw how hard it was to make a living in music, and I thought I would find something else.”

Father Brown practiced civil law until 1985. He completed an internship for the Department of Justice’s Bureau of Prisons regional office in Kansas City, Mo., and as special assistant attorney general in North Dakota, he did a lot of “pardon and probation work,” he said.

In private practice, he had a contract to represent individuals in juvenile court.

“I ended up doing a lot of work around child sex abuse,” Father Brown said. “Little did I know that work would come back to inform me when we faced these kinds of issues (in the church).”

Father Brown was ordained to the priesthood for the Diocese of Bismarck in 1989 and has been a Sulpician since 2005.

As a past president of the Canon Law Society of America (2012-15) with a doctorate in canon law from the Pontifical Gregorian University in Rome, he has apparently held onto his pre-ordination talents.

At St. Mary’s, he hopes to place special emphasis on forming good pastors.

“I was involved when we refashioned the curriculum around 2004 or 2005 to have a pastoral formation program,” said Father Brown, who was a member of the St. Mary’s faculty from 2001 to 2006, also serving as the dean of the institution’s school of theology for the last two of those years. “I hope to enhance that program, given what I had in mind at the beginning.”

Like many seminaries, St. Mary’s sends its seminarians to area parishes for hands-on learning. Father Brown said that the institution is doing far more than resting assured that they are under the care of good supervisors while in the field.

“We wanted to find a way to take advantage of the parish experience in a manner in which we could also bring to bear our pedagogical resources on the process,” he said.

In other words, the seminarians will be sent to the “best pastors,” and will then “unpack” the experience back at the seminary.

Mary Pat Seurkamp, a member of the St. Mary’s board of trustees and a member of the search committee that identified Father Brown, said after the Mass that he brings “a very strong sense of what’s needed to continue the academic quality that has always been here and to strengthen it further.”

“He is not only a great leader but a great role model for the seminarians,” added Seurkamp, who served as president of Notre Dame of Maryland University from 1997 to 2012.

James Cavanaugh, a parishioner of the Church of the Immaculate Conception in Towson and former trustee of St. Mary’s, said that Father Brown “brings a spirit of optimism about the future that’s very exciting.”

Seminarians, priests and well-wishers from the Archdiocese of Baltimore and Archdiocese of Washington, where Father Brown had most recently served as rector of Theological College, the national seminary at The Catholic University of America, were among those attending the installation Mass.

Archbishop Lori was joined by Father Brown as concelebrant, as well as Father John Kemper and Father Robert Leavitt, both Sulpicians. Father Kemper is provincial of the U.S. province. Father Leavitt was president-rector of St. Mary’s from 1980 to 2007 and is now professor of systematic theology at the institution.