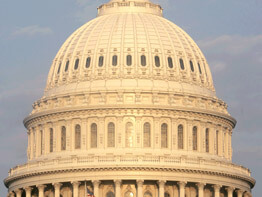 WASHINGTON (CNS) – It’s apt that the start of the new congressional term coincides with the time of year when people are optimistically making New Year’s resolutions.

Lose weight, get to the gym more often, pass comprehensive immigration reform, raise the minimum wage, make sure the farm bill reauthorization helps protect family farmers … you know, the usual.
With Democrats controlling both houses of Congress for the first time in 12 years, the dynamics behind what legislation advances will differ from what they have been under the Republican majority, which could be good news for some long-standing wish lists.

Increasing the minimum wage has long been a top priority for advocates in the Catholic Church and for a growing coalition of religiously motivated groups and individuals, such as Call to Renewal, which has an anti-poverty campaign addressing wages, affordable housing and health care.

House Speaker Nancy Pelosi, D-Calif., includes raising the minimum wage to $7.25 an hour, from its current level of $5.15, among the priorities for the House’s first 100 hours of business. A bill to increase it was to be voted on Jan. 10.

Kathleen Curran, interim director of the Office of Domestic Social Development for the U.S. Conference of Catholic Bishops, said it was likely the minimum wage increase will pass the House and was optimistic about its chances in the Senate.

“The question will be whether it passes in a veto-proof way,” she said, adding that President George W. Bush has telegraphed some support for an increase.

But as happened with a wage-increase bill on the table near the end of the last congressional session, some members of Congress want to attach provisions that would cut into other members’ support.
Even provisions the USCCB might support, such as indexing the minimum wage to inflation so that it automatically increases, should be put off for another time rather than risk losing on the main goal, Ms. Curran said. “We prefer a stand-alone bill.”

Thomas Shellabarger, who tracks policy on urban issues for the USCCB, noted that advocates have been working on a minimum wage increase since the last increase, which was in 1997.

For five years, Mr. Shellabarger also has also been trying to get funding for an affordable housing trust fund, to help low-income families rent, buy or fix up housing. Democrats in Congress have been supportive of the effort, Mr. Shellabarger said, but now that they’re the party in power, it’s not so clear they’re willing to sign off on the estimated $5 billion a year it would take to fully fund it.

Ms. Curran and Mr. Shellabarger’s colleague, Oblate Father Andrew Small, a policy adviser who focuses on international economic development, said he was concerned about the Democrats’ plan to extend the funding of federal operations through a continuing resolution. When the 109th Congress concluded in December, only two of the 12 departmental appropriations bills for the 2007 fiscal year – which began Oct. 1 – had been approved.

Instead, Congress passed a series of short-term continuing resolutions, which mean the agencies are operating as if their 2006 budgets were replicated. Rather than start the 110th Congress by trying to clean up their Republican predecessors’ leftover funding bills, Democratic leaders suggested they would concentrate on getting the 2008 budget passed and let the government function under continuing resolutions through the end of this fiscal year.

If that happens, Father Small said, anti-poverty programs funded through foreign aid appropriations will actually get less money this year than they might if Congress passed the budget put forward by the president.

Along with the USCCB, the Catholic Health Association is pushing for improvements to the State Children’s Health Insurance Program and for expansion of Medicaid to include impoverished low-income legal immigrants. CHA also includes on its policy agenda legislation that helps protect conscience clauses for health care providers and improvements in palliative care.

After a year of dramatic fits and starts, comprehensive immigration reform is still at the top of the agenda for the USCCB’s Migration and Refugee Services. Kevin Appleby, director of migration and refugee policy, said although immigration is not among Speaker Pelosi’s top priorities in the House, there’s a good chance the Senate will have a bill moving toward approval by spring and that the House will get to it over the summer.

“But we’re not taking anything for granted,” he cautioned.

A broad coalition of churches, labor unions, civil rights groups, business owners and farmers united in the last year to support immigration legislation that would establish a guest worker program, dramatically change the current system for family reunification immigration, and make a path for the estimated 12 million illegal immigrants in the United States to legalize their status.

A Senate bill addressing those points could never be reconciled with a House bill that emphasized only enforcement and both pieces of legislation evaporated at the end of the 109th Congress. A House bill approving 700 miles of fence along the Mexican border passed into law, but no provision was made to fund its construction.

Mr. Appleby said he also is pushing for legislation that helps protect minors who are caught up in human trafficking.