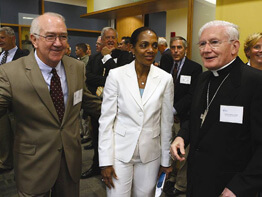 As Cardinal William H. Keeler blessed the new world headquarters for the Baltimore-based Catholic Relief Services Sept. 12, he marveled at the craftsmanship of the renovated building and said it’s a testament to what can be accomplished when Catholics and Jews join forces.
Comparing the $33 million project to his work with the Jewish-Catholic affairs for the U.S. bishops, the retiring head of the Archdiocese of Baltimore called the partnership between the Harry and Jeanette Weinberg Foundation and CRS to provide a state-of-the-art facility for the international relief agency in the old Stewarts Building an ecumenical accomplishment that will benefit people worldwide.
“I am grateful to all of you,” Cardinal Keeler said to scores of on-lookers attending the grand opening ceremony of the new CRS headquarters.
The ceremony was held in the third-floor atrium of the 180,000-square-foot building at Howard and Lexington streets, built as the Stewarts department store in 1889, currently owned by the Weinberg Foundation, and recently given a facelift by CRS, which also has a 30-year lease.
Nearly 400 CRS employees actually began occupying the building – which had been vacant for years – in August.
The international relief organization began looking for a new building in 2000, 11 years after relocating to Baltimore from New York, said Ken Hackett, president of CRS.
After an exhaustive search and four failed bids on other properties, CRS entered into the lease agreement in 2005 with the Weinberg Foundation, a Baltimore philanthropic group committed to redevelopment efforts of the city’s west side.
“I am a Jewish boy in partnership with one of the great Catholic organizations,” said Shale D. Stiller, president of the foundation. “In how many other countries would that be possible?”
The redeveloped Stewarts Building now boasts a 32-by-32 foot-wide atrium that extends from the third to the eighth floor with a glass skylight on the roof, an interactive-video-conference situation room to communicate with its humanitarian operations in 100 countries worldwide, a chapel for prayer, a gym for health-conscious employees and a bike room to encourage staff members to peddle into work.
“Our vision was to have a building that was open, welcoming, bright and respectful of the environment,” said Mr. Hacket, a parishioner of St. Louis, Clarksville, who pointed out the building has been outfitted with energy-efficient appliances and lighting.
Fresh from her Sept. 11 Democratic primary election win, Baltimore Mayor Sheila Dixon said she was “uplifted spiritually” as she walked into the renovated building, and was blown away by the contrast from the last time she toured the site in December of 2006.
“This is a building that reflects the character of the people who work in it and its mission provides a pulse that emanates throughout Baltimore,” said U.S. Rep. John P. Sarbanes, a freshman Democrat who represents Maryland’s third congressional district. “It’s a real badge of honor for this city and this community, making Baltimore a hub for a charitable enterprise – something we celebrate.”