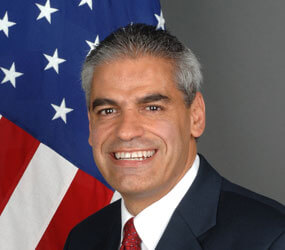 WASHINGTON – With a roomful of theologians, college professors and presidents, political activists, leaders of various church organizations, and family and longtime friends looking on, Catholic theologian Miguel Diaz was sworn in as ambassador to the Vatican Aug. 21.

In a brief, invitation-only ceremony in the ornate Benjamin Franklin room at the State Department, Assistant Secretary of State Phil Gordon administered the standard governmental oath of office and supervised as Diaz signed an assortment of official papers.

The process of stepping into the job as ambassador concludes with Diaz’s formal presentation of his diplomatic credentials to the Vatican.

Diaz, a professor at St. John’s University and the College of St. Benedict, both in Minnesota, is the first Hispanic and the first theologian to represent the U.S. at the Vatican. His predecessors have all come to the job with more extensive backgrounds in political activism or diplomacy.

Diaz was active in President Barack Obama’s campaign, serving on his board of Catholic advisers and as a campaign representative at times, particularly with Spanish-language news media.

In brief comments after the ceremonial part of the event, Diaz said he would bring to the position at the Vatican a strong belief in Obama’s commitment to the idea that “it’s possible to disagree without being disagreeable.”

Diaz said he believes Obama’s presidency and approach to his office have “revived the American tradition that unity comes through diversity,” which he intends to apply to his diplomatic position.

A native of Cuba who came to the United States as a child with his parents, Felix and Silvia Diaz, he was the first of his family to attend college. He is a former president of the Academy of Catholic Hispanic Theologians and a board member of the Catholic Theological Society of America. He is fluent in Italian, Spanish and French.

Diaz, 45, has been at St. John’s and St. Benedict since 2004. Prior to that he taught at Barry University in Miami Shores, Fla.; St. Vincent de Paul Regional Seminary in Boynton Beach, Fla.; the University of Dayton in Ohio; and the University of Notre Dame in Indiana.

Colleagues from those schools and friends from around the country joined Diaz and his family and various political activists at the ceremony, which was not open to the general press.

As Diaz thanked people who have helped him prepare for the ambassadorship – State Department personnel, White House representatives, Vatican nuncio Archbishop Pietro Sambi, colleagues and family members – his father, who worked as a waiter to support his family in Miami, was among those in the room who became choked up with emotion.

“Thank you for all your sacrifices,” Diaz told his parents.

He also echoed comments Gordon made about the entire Diaz family becoming ambassadors for the United States. Diaz and his wife, Marian, who has been director of a program for the theological exploration of vocations at St. John’s and St. Benedict, have four children.

“The whole family will be ambassadors of the United States,” Gordon said.

Diaz made a point of thanking the U.S. Senate for completing his confirmation process in time for his young children to be enrolled in school in Rome by the start of the school year.