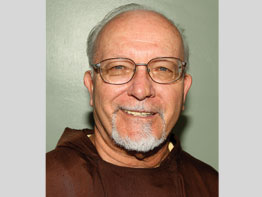 That’s a sentiment he would not have shared four years ago.

Father White, 69, spent 36 years as a Capuchin missionary in Papua New Guinea, a nation to the north of Australia. In 2004, the Pittsburgh native was assigned to a parish in Philadelphia, allowing him to gradually reintegrate himself back into American life.

“I needed time to adjust back to my own culture,” Father White said.

Father White studied linguistics at Georgetown University and anthropology at The Catholic University of America, disciplines he put to good use in Papua New Guinea, a nation of 6 million where more than 850 indigenous languages are spoken.

“Some of the languages were similar, like French and Spanish, but many are dissimilar,” Father White said. “My problem was, when you’re speaking to people for whom English is a second language, you use 15-cent words, with only two or three syllables. My active vocabulary had really shrunk.

“In Philadelphia, I took my public transport pass to Staples and put it in plastic. I told my (Capuchin Franciscans) brothers that I got it ‘laminized.’ They got a kick out of that.”

Other than three months in the U.S. every three years, Father White spent decades in Papua New Guinea, where one in four is Catholic, making it the most popular faith. He taught at a minor seminary, and ministered in remote mountain villages and in towns with 10,000 Catholics.

“They’re a warrior people,” Father White said. “You knew where you stood with them.”

In Baltimore, Father White will pastor a community that was created in response to declining numbers at St. Jerome, St. Martin and St. Peter the Apostle.

“I understand that because of demographic changes at the three parishes, with each shrinking, it was difficult to have good liturgies,” Father White said.

Father White was interviewed Aug. 4, within hours after arriving at the Transfiguration office. He had spent the previous day in his hometown, where his brother, Father Kenneth White, was installed as a pastor after 20 years at another Pittsburgh parish.

“When it rains,” Father White said, “it pours.”