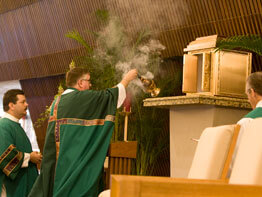 For two generations, the tabernacle (which contains the Eucharist) was located in the chapel, a separate room. This made it impossible for worshippers to view it, and therefore they were not being exposed to the real presence of Christ during the parish’s weekend Masses. This has been the case since 1969 when the church and chapel were built.

A second rationale for installing the new tabernacle, Father Bolger said in an e-mail, is a document released from the Vatican called “Instruction on the Eucharist,” stating that the “Most Holy Sacrament is to be reserved in a tabernacle in a part of the church that is noble, prominent, readily visible and adorned in a dignified manner.”

“As you look at the tabernacle at the center of our sanctuary now,” he said, “you feel like it was always meant to be there. In no way does the tabernacle detract from the spirit of the liturgy.”

A week before the dedication, the parish’s priests spoke at each Mass about the installation of the tabernacle and liturgical postures, and received an “overwhelming” positive response. In addition, Father Bolger said, the dedication ceremony “was received by our parishioners with great joy.”