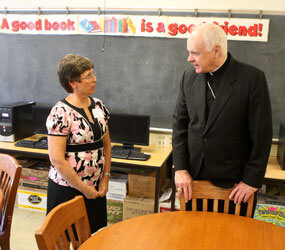 As 150 new students arrived for an orientation, the new principal saw something surprising. Among the group was Redemptorist Father Kevin Milton, pastor of Our Lady of Fatima, who waited for students from his parish’s former school in the parking lot.

Our Lady of Fatima closed in the spring and he wanted to make their transition easier. So, Father Milton walked with them into the building.

“We literally did not have a tear as the students walked in,” Walters said.

The boxes are in the main hallway, where students are encouraged to share mementos from their previous schools as they enjoy a fresh start.

“It’s the perfect visual reminder that something new is happening,” Walters said.

The first day of school for receiving schools is a major moment in the archdiocese. Archbishop Edwin F. O’Brien had lunch Aug. 26 with the staffs of Seton Keough High School and Holy Angels School, a new Baltimore City elementary school housed in Seton Keough.

Students from Baltimore City’s St. Bernardine, St. William of York and Father Charles Hall are among the 150 enrolled at Holy Angels. Its first day of school is slated for Sept. 7.

Cardinal Shehan School is bustling as students from Mother Mary Lange followed their principal, Oblate Sister of Providence Rita Michelle Proctor, to her new assignment at Cardinal Shehan, on the campus of St. Matthew, Northwood.

Many students there are taking advantage of new bus service, a partnership between a local businessman and the archdiocese. Walters planned on riding one of the buses with her students this week.

“It’s been exhausting,” Walters said, “but so exciting.”

Shirley Wise, principal of Linthicum’s St. Philip Neri, stood outside her school Aug. 30, before the first day of classes.

“I thought, ‘Oh my golly every other family is a new face,’ ” Wise said. “Everybody had a smile on their face.”

Creating an educational home for 65 new non-preschool students, many of whom came from Ascension School, St. Rose of Lima, Sacred Heart of Mary and Our Lady of Fatima, took planning. The school had practice in 2009, when it welcomed many students from the Catholic Community School of South Baltimore after it closed.

A welcoming Mass this past spring laid the groundwork for St. Philip Neri. The school annually holds an ice cream social. This year’s, Aug. 26, allowed the new students to meet teachers, make friends, see their classrooms and play games.

“I thought it went extremely well,” Wise said. “I saw a good deal of mixing between old families and new families.”

At Our Lady of Victory School in Arbutus, 122 new students, 85 from closed schools, visited before its first day. They learned their desk locations and received schedules. Longtime students are serving as “buddies.”

When the first day of classes arrived, staffers were in constant communication about how students were acclimating.

“We want to make it a very smooth transition,” Our Lady of Victory principal Tom Riddle said.