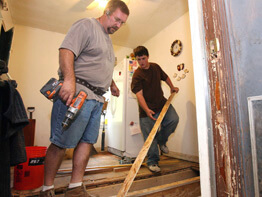 GARY, Ind. – While little is known of the quiet, gentle man who served as the protector and human father of Jesus, the image of Joseph as a carpenter invokes creative thoughts of how he might have served his God and neighbors.
With this fatherly saint as inspiration, St. John the Evangelist Parish in St. John has launched a new endeavor – the St. Joseph the Carpenter ministry. Defined in their mission statement as a diverse group of people in service to the less fortunate, the group vows to help “restore the dignity of our brothers and sisters in Christ through love, compassion and home-repair assistance.”
Traveling on a warm July Saturday to the Black Oak section of Gary, a group of nine men and women assisted resident Maggie Arreola.
Arreola, the mother of three, has been plagued with health problems, but more immediate concerns are her kitchen floor and several nonfunctioning drains in the home. Her plight came to the attention of some people at nearby St. Ann Parish who called on the new ministry for help.
Looking at the sagging floor damaged by a termite infestation, workers estimated it was only a matter of weeks before it would give out completely.
“It was lucky she didn’t fall through the floor,” said Keith Burke, ministry leader.
As wife Susan ripped up floor tiles, Burke and his crew were busy ripping up the rotting floorboards and studs, starting almost literally from scratch.
“This is so wonderful,” a tearful Arreola said. “There is no way I could have done this myself.”
Arreola’s brother, Jose Valenzela, was on hand to help. Valenzela, who spent the previous two weekends painting his sister’s living room, was eager to watch the major repairs being completed while offering assistance wherever and whenever he could.
The St. Joseph ministry, a long-held vision of Burke’s, is open to anyone in the community who wants to make a difference in a very tangible way to those in need. Working on the second and fourth Saturdays of each month, the group aggressively tackles projects that would most likely go undone due to financial restraints or physical limitations.
“This ministry has been something I’ve been called to do,” said Burke. “So I just went out and did it.”
An enticing part of the ministry, according to Burke, is that it is accessible to many people on many levels gifted with a wide variety of skills and talents.
Recently welcomed into the faith, St. John the Evangelist parishioner Laurie Burczkowski sought a way to become involved. Busy with a young son, Burczkowski offered to make lunch for the hungry workers and the family.
“Making lunch and delivering it here today was a way I could be involved,” she said.
Bob Rinearson is not Catholic but his family attends St. John the Evangelist. Rinearson experienced outreach ministry when he accompanied parish members on a Katrina mission trip to New Orleans.
Not only did this retired carpenter become hooked on helping others, but he was moved enough to take the first steps in becoming a Catholic. “This is just a way of giving back what I have been blessed with,” he said.
Burke added, “This isn’t just a man’s ministry. This is something you can do as a family.”