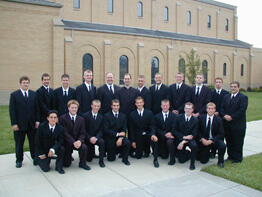 SEWARD, Neb. – The 23 newcomers attending St. Gregory the Great Seminary in Seward this fall are “full of questions, obviously prayerful and eager to learn,” said Father John Folda, seminary rector.
“They’re going to be a great group of seminarians, I have no doubt,” he added.
Among them are 19 young men who are in priestly formation for the Diocese of Lincoln. The other four new men are studying for the priesthood for either the Diocese of Rockford, Ill., or the Diocese of Madison, Wis. One student studying for Lincoln is from the Canadian province of Manitoba.
Father Folda said it is the largest group to enter St. Gregory the Great all at once, but everything has gone smoothly in terms of course scheduling, housing, books and all the other particulars. The first-year class of seminarians is one of the largest in any diocese in the United States.
“God smiled upon us,” he said with a laugh. “He knew he was going to give us a lot of men this year.”
“We’re very blessed by God,” agreed Father Robert Matya, diocesan vocations director.
The first-year seminarians moved in Aug. 24, had a weekend of orientation and started classes Aug. 27. Since then, they have been getting to know each other and the seminary faculty, studying and learning to adapt to a schedule that can be quite a bit different from what they were used to as students or workers.
“It’s very routine, very organized,” said Benjamin Tuma of North American Martyrs Parish in Lincoln. “The days are long, and we wake up early for morning prayer.”
Corey Harrison of St. Leo Parish in Palmyra agreed that the biggest challenge to the seminary lifestyle is “adjusting to wake up at 5:30 a.m. instead of sleeping until 8,” but he said it’s worth the trade-off.
“Spending time with a lot of guys who are just as excited about my faith as I am … I wouldn’t take it back for anything,” he stated.
Father Folda said that the seminarians “really do grow into a brotherly relationship.” The smaller size of the seminary makes that easier than in a situation where there are hundreds of men, he said.
Father Matya noted that each man was called to discern a vocation to the priesthood in a different way.
“Their stories are all different,” he told the Southern Nebraska Register, Lincoln’s diocesan newspaper. He said they come from “praying families first and foremost” and many have been involved in organizations such as the Fellowship of Catholic University Students, or FOCUS.
Hastings native Alex Driscoll cited his nine years as a counselor at a Catholic camp as the experience that helped him discern his calling.
“It was time out of my schedule, becoming closer to God than I had ever felt, being surrounded by priests and sisters and kids all there for the same reason – to get closer to God,” he recalled. “Every year, I got a feeling that this is what I should do.”
Caleb LaRue, a graduate of Millard West High School in Omaha, said he began thinking about the priesthood as early as eighth grade, but “I always envisioned seminarians and priests as guys who spend 19 hours a day in prayer and I didn’t think I was holy enough to consider it.”
While working at the Newman Center at the University of Nebraska-Lincoln, however, he discovered that priests were “just regular guys God called to serve.”
Mark Heffley “grew up all over” and was a premed student at the University of Nebraska-Lincoln who had the idea that he could be both a doctor and a priest. However, during his second year at the university, his desire to study medicine “fell away,” and he elected to transfer to St. Gregory the Great Seminary.
“I just loved it here so much, I decided to study for this diocese,” he added.
The men spend their days in prayer, worship, studies, recreation and more prayer. The formation process helps each man fully understand his vocational calling.
Some may not complete their seminary training, but “they’ll grow deeper in their spiritual lives and in their relationship with Christ by entering this period of discernment,” explained Father Matya. “That’s helpful for anyone.”
Both Fathers Folda and Matya encouraged everyone to pray diligently for vocations to the priesthood and religious life.
“There are lots of young men and women who are trying to discern what God wants them to do in their lives and that’s not always easy to figure out,” said Father Matya.