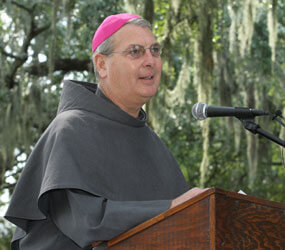 SAVANNAH, Ga. – The Conventual Franciscan pastor who will become Savannah’s bishop Oct. 18 observed at his introduction July 19 that it will take a helicopter to reach the far-flung ends of the diocese.

Bishop-designate Gregory John Hartmayer, the former principal of Archbishop Curley High School in Baltimore, was introduced that morning by retiring Bishop J. Kevin Boland at a news conference in Layfayette Square, opposite the Cathedral of St. John the Baptist.

In the shady square, Bishop Boland placed a magenta bishop’s zucchetto atop his successor’s head, symbolically transferring the diocese to Bishop-designate Hartmayer on the 161st anniversary of its creation.

He joked about “naively” wondering that morning as his retirement became official, whether angels would come down and transfer responsibility.

“I am now like an automobile running out of fuel and I want to get the very last value out of the moment,” he said of his last official act as bishop.

Pope Benedict XVI accepted his resignation July 19, the same day he named his successor. Bishop Boland is 76; he turned in his resignation at age 75 as required by canon law.

Bishop-designate Hartmayer,59, expressed gratitude to the pope for his confidence in selecting him for the position. In his remarks, he said that since he got word of the impending announcement July 5, “my head and my world have been spinning in opposite directions.”

His episcopal ordination is scheduled for Oct. 18 in the Cathedral of John the Baptist.

A native of Buffalo, N.Y., he was ordained for the Conventual Franciscans in 1979 and has worked as a guidance counselor, teacher and principal at schools in Baltimore, various cities in New York and in Florida.

He has held posts within his Province of St Anthony of Padua, and as a delegate to provincial chapters.

Bishop Boland noted that he is just the second Conventual Franciscan to become a bishop in the United States in the past 100 years – and that the previous one became a cardinal.

Bishop-designate Hartmayer holds a bachelor’s degree in philosophy from St. Hyacinth College and Seminary in Massachusetts and three master’s degrees: in divinity from St. Anthony-on-Hudson in Rensselaer, N.Y., in pastoral counseling from Emmanuel College in Boston, and in education from Boston College.

Bishop Boland is a native of County Cork, Ireland, who studied for the priesthood in Dublin and came to the United States to be ordained for the Savannah Diocese in 1959. After various parish positions and administrative jobs in the diocese, he was named bishop of Savannah in 1995.

Bishop-designate Hartmayer said he looks forward to meeting and working with the priests, religious and laity “of the parishes in the 90 counties of south Georgia. I think I am going to need a helicopter instead of a car to get to all those counties.”