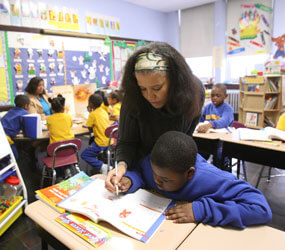 As the Archdiocese of Baltimore plans to implement recommendations made by Archbishop Edwin F. O’Brien’s Blue Ribbon Committee for Catholic Schools, some have already taken shape.

A team-teaching model, a dual language program and the expansion of the celebrated PRIDE program have created excitement inside three schools since being unveiled in the fall of 2010.

St. Ambrose Catholic School in Park Heights was chosen to be the host school for the innovative New American Academy model, which has its roots at Harvard University. Each class has two teachers, who will move up with students as they complete a grade level. The model is being used in kindergarten and first grade this year.

“I think we’re doing well,” said Pamela Sanders, principal of St. Ambrose. “I know the parents love it and the kids are happy. We hope that it will catch on and people will see what a wonderful program we have.”

Sanders said having two experienced teachers fosters greater achievement for students. The project-based learning means one teacher can lead the lesson, while the other assists students. St. Ambrose teachers engaged in team-building exercises and professional development during the summer of 2010.

“I’m really blessed to be working with the staff I have,” Sanders said. “They work so well together.”

St. Ambrose brought back its pre-kindergarten class in the last year, adding 15 children there.

“We’re really trying to build our school from the ground up,” Sanders said.

Growth is also happening at Archbishop Borders School in Highlandtown. More than 50 percent of its students have Latino backgrounds. The school has implemented a dual language program where kindergarten and first-grade students are learning to be literate and fluent in both English and Spanish.

The program is the first of its kind in the archdiocese and could serve as a template. Principal Cathy Marshall said the pre-K-3 and -4 classes are almost full as a result of excitement about the program.

“Our dual language program is very exciting,” she said. “Our students know every Tuesday and Thursday in pre-K that their courses are all taught in Spanish.”

St. Clement has 30 students in the program, the majority of whom came from Sacred Heart of Mary and Mother Mary Lange. The two schools operated PRIDE, but closed last spring in the archdiocesan consolidation plan. PRIDE Plus serves students with average to above-average intelligence levels who also have learning disabilities.

“We’ve definitely made a smooth transition,” principal Pamela Walters said. “Adjustment happens to be one of the tougher pieces for our PRIDE students. For some students, it’s the same, if not stronger, education.”

Walters, who held the same position at Sacred Heart of Mary, said PRIDE families and students learn to explain and address their challenges. Potential families ask her about PRIDE all the time.

“It’s about empowering their child,” Walters said. “The students learn their learning disability is a gift given by God for a specific reason.”