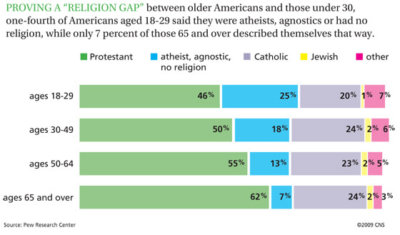 WASHINGTON – There is a growing “religion gap” between older Americans and those under 30, according to a new Pew Research Center Social & Demographic Trends survey.

At 7 percent, the under-30s also were more than twice as likely as those 65 and over (3 percent) to say they belonged to a religion other than Protestant, Catholic or Jewish.

The 152-page study, called “Growing Old in America: Expectations vs. Reality,” addressed a variety of issues related to aging. The margin of error was plus or minus 2.6 percentage points for the survey, which involved telephone interviews with 2,969 adult Americans between Feb. 23 and March 23 this year.

Because an estimated 5 percent of Americans older than 65 are in nursing homes and would not be reachable through normal telephone interviewing, Pew also interviewed more than 800 adults with parents 65 or older and included their responses in a separate section of the study.

Pew also found differences in the importance of religion based on gender and race, especially for older Americans. Seventy-six percent of women 65 and over but only 53 percent of men in that age group said religion was very important to them.

Eighty-seven percent of black Americans older than 64 said religion was very important in their lives, compared to 63 percent of older white Americans.

Pew Research Center found widespread agreement when it asked participants in its survey whether they saw “a major difference in the point of view of younger people and older people today.” About four-fifths of respondents – 79 percent across all age groups – said yes, with little difference among young, middle-age or older Americans.

In response to an open-ended question about the differences between generations, nearly half of those polled gave an answer that fell into the broad category of “values,” while about a quarter said the generations differed in their general outlook on life.

“Within the broad category of values, the top volunteered responses are morality, ethics and beliefs (12 percent) and a sense of entitlement (12 percent),” the survey report said. “Young, middle-aged and older respondents cite morality and ethics in roughly equal proportions,” it added.