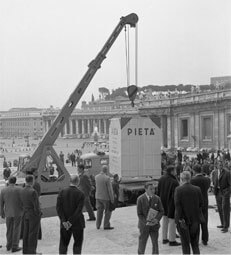 VATICAN CITY – Scholars, history buffs and the public at large will now be able to peek inside some of the Vatican’s historical black-and-white photograph collection.

The written contents of the Vatican photo service’s entire Giordani Collection have been transcribed into a searchable Microsoft Word file that can be sent, free of charge, to anyone on request by e-mailing photo@ossrom.va.

Thanks to the new resource, some half-million images, mostly black and white and taken between 1933 and 1975, will be available more easily to the public for research and sale. Prospective buyers also can request the photos they would like to purchase by e-mailing photo@ossrom.va, specifying the photo caption and the corresponding number.

The variety of pictures is astounding. One can find the usual pictures of the meetings and travels of Popes Pius XI, Pius XII, John XXIII, and Paul VI; of important curial officials and visiting cardinals from all over the world; and of world leaders like Italian dictator Benito Mussolini and U.S. Presidents John F. Kennedy and Dwight D. Eisenhower.

There are also more than 100 shots of Michelangelo’s famous “Pieta” statue being packed in a crate and hauled out by crane for shipping to the 1964 World’s Fair in New York.

Sometimes the snapshots just capture daily life in Rome and the Vatican or immortalize the ordinary: There is a picture of Pope John XXIII’s shoemaker, ID snapshots of Vatican employees, and a photo of a man named “Galassi” who in 1960 was the Vatican’s oldest “sampietrino” – one of the workers responsible for the upkeep of St. Peter’s Basilica and St. Peter’s Square.

But here and there are the odd and unusual, like a picture of someone’s kidney stones, photos of ceramic cats, and – perhaps because cars were still a novelty at the time – countless shots of fender benders and car accidents in and around the Vatican.

Readers can sift through the text line by line or do a word search of the 367 pages of photo captions in the electronic file.

Unfortunately, the file does not show the images. It is an exact transcription of the photographer’s archival notes which means it is written in Italian and names are sometimes misspelled. When looking for Neil Armstrong and Pope Paul, for example, typing in “Armastrong” for the U.S. astronaut will yield a find.

But, on the whole, a search for “Spellman” to look for what images the file has of the late New York Cardinal Francis J. Spellman in Rome will give the reader numerous hits.

This new electronic file, which lists the contents of the “Giordani Collection,” is a modest but significant start to the Vatican photo service’s long-term plans of updating and improving how it archives and preserves its collections.

The Giordani Collection takes its name from Francesco Giordani, the private Rome-based photographer the Vatican commissioned starting in the 1930s, long before the Vatican set up its own photography service in 1977.

The half-million glass-plate and film negatives of varying dimensions are kept the same way Giordani stored them – in thousands of cardboard boxes.

The boxes “are still piled rather tight and the boxes are very compressed so the negatives are often pressed against each other,” said Salesian Father Giuseppe Colombara, head of the Vatican’s photo service, which is part of the Vatican newspaper L’Osservatore Romano.

He told Catholic News Service that Giordani just reused the cardboard cartons his photographic paper came in for storing his negatives.

When Giordani closed up shop in 1978, the Vatican acquired his archive and the rights to use the photos.

Giordani kept meticulous notes and caption lines for his photographs in 37 notebooks dated 1933-1975. Each entry also includes a number indicating the box in which the negative is stored.

Father Colombara said officials decided to transcribe these notes into an electronic file to facilitate the search for the many photographs researchers, writers and historians request.

After spending months transcribing Giordani’s cramped handwriting, the Salesian priest said officials decided the searchable file also should be made available to the public.

“It would be a shame to keep it hidden,” he said.

People also can do a limited search of the collection’s images on the Web site www.photo.va.

But, right now, only about 2,300 pictures from the collection have been uploaded to the site.

Scanning these old images onto the site is extremely labor-intensive, Father Colombara said, and the Vatican still does not have the money, personnel or proper equipment to scan and make public anytime soon all 500,000 images in the collection.

While digital photography has eased the way pictures are dated, captioned, organized and stored, he said this digital medium still poses enormous problems for storage.

The large megabyte size of each photo now eats up enormous amounts of digital space, putting a strain on both the photo service’s Web site and its shelves loaded with discs, he said.

With Vatican photographers snapping 1,000 to 3,000 high-definition, publication-quality pictures a day, he said, they need to start looking into “beefing up computer memory with giant hard drives.”

“It was difficult to foresee such a boom in photography – digital photography,” he said.

Back in the early days of Giordani, “the pope wasn’t photographed that much,” he said.

But today the number of papal activities has mushroomed, he said, “and every event with the pope is photographed every day.”

Today, there is so much work to be done that it looks like those days of tracking down car wrecks to document for the Vatican archives are long over.