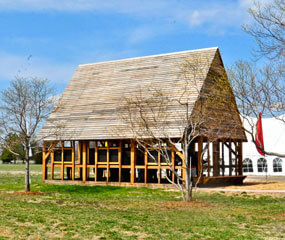 ST. MARY’S CITY – Marylanders of all ages celebrated the state’s 377th birthday at Historic St. Mary’s City March 26, in a colorful program that included 24 fourth-graders from across the state carrying the flags of their counties and an opening procession with seven men in colonial garb portraying the St. Maries Citty Militia from the 17th century.

The Maryland Day program at Chapel Field included the dedication of a new open-air pavilion near the reconstructed Brick Chapel of 1667, that includes 12 panels tracing Maryland’s legacy as the birthplace of religious freedom in the United States.

“This lays out in capsule form the history of this location, its relevance to religious freedom in Maryland and America, and it gives a place for people to rest and contemplate the complex and important story that this site represents,” said Henry Miller, Ph.D., the director of research for Historic St. Mary’s City, Maryland’s first capital.

Lord Baltimore – Cecil Calvert– a Catholic nobleman from England, founded the colony on the ideals of “liberty of conscience” and “freedom of worship,” and he championed those ideals throughout his life, Miller noted.

The new pavilion tells that story, from the first English settlers making landfall in Maryland on the Feast of the Annunciation, March 25, 1634, at nearby St. Clement’s Island, a day commemorated each year as Maryland Day. On that day, Jesuit Father Andrew White celebrated the first Catholic Mass in the English-speaking colonies for the settlers who landed on the small island.

The reconstructed Brick Chapel at St. Mary’s City, originally built as a Catholic chapel in 1667, stands today as a monument to Maryland’s status as the birthplace of religious freedom in America. But the panels at the nearby pavilion reveal how freedoms can erode and even disappear.

The first panel notes how Cecil Calvert “launched the first society in Maryland where freedom of religion was the official policy.” Maryland, unlike the other colonies, did not have an official or established church, so “Anglicans, Presbyterians, Puritans, Quakers, Roman Catholics and others could worship in Maryland and live freely without the government imposing a religion upon them,” that panel notes.

But those freedoms, in the birthplace of religious freedom, began to unravel. Another panel in the pavilion tells how, after a civil war in England, Father Andrew White, who had missioned to Native Americans in Maryland and was known as “the apostle of Maryland,” was arrested and taken back to England in chains in 1645.

The pavilion’s last panel, titled “An End of Freedom But Persistence of Faith,” tells how, in 1704, by order of the royal governor, the door to the Catholic chapel in St. Mary’s City was locked, and in Maryland, “Catholics were barred from holding office and voting, were double taxed and only permitted to worship in the privacy of their homes. Jesuit priests were outlawed, but continued to minister to Catholics.”

In an interview, Miller noted, “This is a place, where for a period of a half century, what we take as a basic human right, flourished, and then suddenly ended. That is a lesson one forgets at our peril. Freedoms don’t necessarily endure, and Maryland is one of the classic examples of that in the ongoing struggle for human rights,” the historian said.

The last panel tells the story of how, by 1776, Maryland had the largest number of Catholics in the new United States, and how in 1789, a native son of Maryland, Archbishop John Carroll, became the first Catholic bishop of the United States, heading the Diocese of Baltimore, which then included all 13 original states. His cousin, Charles Carroll of Carrollton, another Marylander, was the only Catholic signer of the Declaration of Independence.

Later, the new nation’s Bill of Rights, in the First Amendment to the U.S. Constitution, would enshrine the ideal on which the Maryland colony was founded, that “Congress shall make no law respecting an establishment of religion or prohibiting the free exercise thereof.”

In 2009, Cardinal Donald Wuerl of Washington participated in a ceremony at the Brick Chapel in St. Mary’s City, at which its doors were unlocked, using a replica of the key believed to have locked the original chapel in 1704. Since then, the cardinal has spoken and written about the need for people to remain vigilant in defending their religious freedom, when secular attitudes and even proposed laws threaten to erode the rights of people who, as a matter of faith, oppose issues like abortion and same-sex marriage.

Jesuit Father William George, who grew up in Southern Maryland and was recently appointed by the governor to serve on the Historic St. Mary’s City Commission, offered the invocation at the Maryland Day ceremony.

“Open our hearts. Grace us with a vision comparable to those very first Marylanders who followed your inspiration to the wonderful Chesapeake and found St. Mary’s City. May we have their same courage and live it,” he prayed. Father George, the former president of Georgetown Preparatory School in North Bethesda, now serves as a special assistant for development and public affairs for the Archdiocese of Washington.

After the ceremony, Muffin McCoy Padukiewicz, the events manager for Historic St. Mary’s City, reflected on the legacy of those first Marylanders, and “the diversity of people who came, (and) the strong faith that so many of them had. They came to the New World full of hope, and they established a strong foundation that still lives in Southern Maryland today. We have so much to be thankful to them for.”

Zimmerman is editor of The Standard, the newspaper of the Archdiocese of Washington.