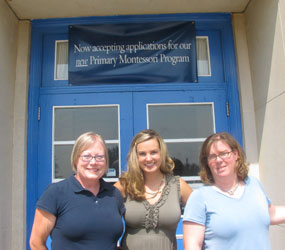 Construction crews are putting the finishing touches on massive revamping of four classrooms inside the Rodgers Forge school to fit the incoming Montessori program. The school, which is the first of its kind in the Archdiocese of Baltimore, will have a ribbon-cutting ceremony Aug. 26.

The program will initially be for pre-kindergarten classes for 3- and 4-year- olds. Next year will bring the addition of the kindergarten class to the Montessori model as well. Forty-five students are enrolled for this year’s classes, which are meant to cross ages and promote individualized learning in a structured environment.

“It’s a real pure approach to learning,” Dates said. “The kids are not distracted by ‘stuff.’ They really have the opportunity to engage purposely in what they’re doing.”

Archbishop Edwin F. O’Brien’s Blue Ribbon Committee for Catholic schools first proposed the new program. Made up of civic, education and business leaders, the panel was formed to develop a new path for Catholic schools, which have been hit hard by declining enrollment and rising tuition rates amidst a faltering economy.

Thirteen schools in Baltimore County and Baltimore City were closed in the spring of 2010. The archdiocese was determined to implement programs that would increase academic excellence and make schools more competitive in the market.

Among the proposed programs was a Montessori approach, which was invented by physician Maria Montessori in the late 1800s. The program allows a child to proceed at his or her own pace and focuses on all aspects of human development to allow for discovery.

Dates’ previous school, St. Clare in Essex, was among those closed, and she applied to Pius X. She had no experience in the Montessori model, but was excited about the possibilities. She believes it could be a game-changer locally.

“If we were going to do a really strong program, we want it to be a gold standard,” Dates said. “We don’t want it to be something that we made fit into what we have. We want to show that there’s a commitment by the archdiocese and St. Pius to make this a strong program.”

In addition to bathrooms, classrooms will feature child-sized furniture. The goal is to create an environment for self-sufficient children.

“The reason it works is because it really is an individualized approach,” Dates said.

It was announced in early June, as construction began, that the Raskob Foundation for Catholic Activities awarded St. Pius X a $15,000 grant to be used for the purchase of Montessori materials for the classroom.

The school has been working with Loyola University Maryland, which has a partnership with the American Montessori Institute. Teachers Mary Carol White and Jessica Cohen-Knight were among the educators who spent the last year enrolled in Loyola’s program to be certified as Montessori teachers.

White and Cohen-Knight had to complete considerable amounts of homework in order to graduate from the Loyola program. White said the Montessori certification process was rigorous. The teachers observed a Montessori class last fall, taking copious notes for several weeks and then taught classes as well during the spring. It proved to be a major sacrifice.

“They counted our minutes in class,” White said. “They document every minute you’re there because you have to meet international standards.”

There is an irony in the Montessori teaching approach: it’s rigid to create the desired learning flexibility.

“It is nice because we not only know what to teach, but how to teach it,” White said.

Both White and Cohen-Knight said they have to keep meticulous binders for planning. Children will ultimately correct themselves in the learning environment, building up esteem.

“Their lives were put on hold for a year so that they could train,” Dates said. “For that, we are enormously grateful.”

Cohen-Knight was a teacher at St. Clare before it closed and chose to go down a new path with Montessori.

“I’m really excited to get back in the classroom,” Cohen-Knight said.

White previously taught in Montessori, but wanted to go back to the program after working in the private sector.

“I really believe in Montessori,” White said. “It’s Montessori and it’s Catholic. I really want to help children. I know that sounds sappy.”

Added Cohen-White: “This has been working for 100 years. What they’re doing is tried and true.”