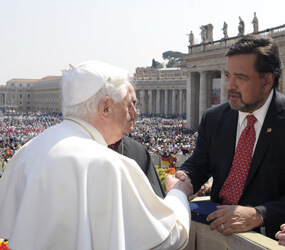 VATICAN CITY – For making what he described as “the most difficult decision in my political life,” Gov. Bill Richardson of New Mexico was given a front-row seat at a papal audience and was to see Rome’s Colosseum lit up in honor of his state.

Greeting Pope Benedict XVI April 15, Gov. Richardson asked him to bless the silver olive branch given to him by the Community of Sant’Egidio in recognition of his decision March 18 to sign a bill abolishing the death penalty in New Mexico.

Archbishop Michael J. Sheehan of Santa Fe said he introduced the governor to Pope Benedict, saying, “Holy Father, this is our governor and he just repealed the death penalty.” The archbishop added, “And the pope nodded very happily in agreement.”

The Rome-based lay Community of Sant’Egidio, which is active in a worldwide campaign to eliminate capital executions, hosted the governor’s visit and arranged the April 15 Colosseum lighting with the city of Rome.

Gov. Richardson, a Democrat and a Catholic, had been a supporter of the death penalty; he also supports legalized abortion and embryonic stem-cell research, which the church opposes.

Archbishop Sheehan told Catholic News Service, “We were able to help him understand our opposition to the death penalty and he did indeed change his view and signed the law. One thing at a time.”

“It is the result of our dialogue and prayer, and that of many others, that enabled him to see and to change his position,” the archbishop said. “There are better ways to protect citizens from bad guys than killing them.”

The archbishop pointed out, however, that it was not the Vatican or the Catholic Church that was honoring Gov. Richardson, but the Catholic lay Community of Sant’Egidio.

At a press conference hosted by the community, Gov. Richardson said he was influenced by several people: state Rep. Gail Chasey, who had been fighting to eliminate the death penalty in New Mexico for more than a decade; the New Mexico Coalition to Repeal the Death Penalty; and “the archbishop and the Catholic Church, because they are very, very influential in a Catholic state like New Mexico.”

After supporting the death penalty for years, Gov. Richardson said, “This is what changed: One, I didn’t want America to continue being isolated,” being one of the very few democracies still using capital punishment.

Second, he said, he visited a prison before making the decision and decided that life in prison, staying in a small cell 23 hours a day, “was worse than death.”

Also, the governor said, he was moved by the fact that some 130 people sentenced to death in the United States had been freed in the past 10 years when it was discovered they were wrongly convicted.

The fact that most people on death row are members of minority groups – “African-American or Hispanic like me,” he said – made him question the fairness of the system.

And, in addition, he said, with all the necessary legal processes involved in ensuring fairness and justice before an execution, capital punishment is costlier than life imprisonment.

“Plus, my archbishop, a man who I deeply respect, was very active on this issue,” he said.

Archbishop Sheehan was asked at the press conference about the decision of some bishops to refuse to give Communion to Catholic politicians, like Gov. Richardson, who do not uphold certain church teachings, particularly on the sacredness of every human life.

“I do not want to bring Holy Communion into a situation that makes it look like a penalty. I do not think it is good to take the sacrament of Holy Communion and make it a weapon in a context that is political,” he said.

The archbishop said the Vatican has “not been approaching politicians who have a different view in that way, nor do I think we should do it in the United States.”

At the same time, he said, he will continue to defend the right of church members, including bishops, to speak publicly about political issues that have a moral implication.