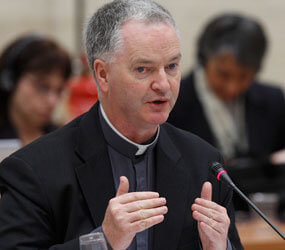 VATICAN CITY – A secret ingredient to good communication is listening, and interactive technologies are making that so much easier to do, said a Vatican official.

Monsignor Paul Tighe, secretary of the Pontifical Council for Social Communications, said the key to using new media successfully is in “building relationships; it’s not just about transferring information.”

“Good communication begins with listening, and new technologies can let you listen if you use them right,” he said.

He and Cardinal Roger M. Mahony, retired archbishop of Los Angeles, were among the many participants attending the council’s plenary assembly Feb. 28-March 3 on the theme “Language and Communication.”

Cardinal Mahony said the church more than ever has to enlist the help of young Catholics who are fluent in new technologies and “are very anxious to assist the church in this endeavor.”

“I think we need to enlist their care and their leadership a lot more than we have done before,” he told Catholic News Service.

Giving young people solid formation and a more active role to play also helps them “take ownership (of) the church and their own faith, and then they work closely together with all of us to proclaim the Gospel in new ways,” he added.

Monsignor Tighe told CNS that one of the important points to come out of the meeting was remembering the real point of communication.

“It’s not getting information from person A to person B, it’s establishing a relationship between A and B, where there is an understanding of each other’s perspective,” he said.

Using new technologies isn’t just about putting text or images into new digital formats, he said, “it’s about creating community around that information” and devoting resources to have the right people manage the new community that’s created.

Managing that community is a critical step in the listening process of communication, Monsignor Tighe said.

Social networking sites or other interactive features online let the community-builder listen to what people are saying via their comments, suggestions, and feedback, he said, and web analytic software also gives site managers valuable demographic information and clues about how people found the site and what pages got the most traffic.

But no matter what, “we should never forget that technology must be at the service of human communication and not the other way around,” he said.

Catholic communicators need to couple their content with their own witness to the Gospel, he said, quoting Pope Paul VI: “Modern man listens more willingly to witnesses than to teachers, and if he does listen to teachers, it is because they are witnesses.”

Monsignor Tighe said the council is still working on a new pastoral document updating what the church teaches about communication.

Cardinal Mahony said the contributions and insights of the members “were great,” but that, like others, he also felt that the draft document was “way too long.” Something shorter “doesn’t mean it can’t be substantive, but it’s got to come across easily and quickly,” he said.

Monsignor Tighe said when the document is ready, the council will get outside help to turn it into a multimedia presentation “to do what we’re saying and so it’s not a plain document.”