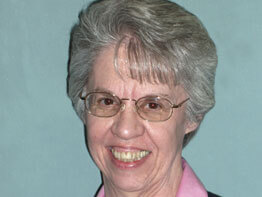 ST. LOUIS – Sister Mary Whited, the new president of the Leadership Conference of Women Religious, likes to keep doors open and the conversation going. And she promises “not to back down” when discussions grow difficult.

That’s good, because her national organization, whose leaders represent more than 90 percent of all women religious in the U.S. church, has a lot to talk about, and not much of it will be easy.

Sister Mary officially became president of LCWR in August. The native St. Louisan also is superior general of the Sisters of the Most Precious Blood of O’Fallon, based in St. Louis.

LCWR has approximately 1,500 members who are the elected leaders of some 370 religious orders across America. They represent about 67,000 Catholic sisters. The conference develops leadership, promotes collaboration within the church and society, and serves as a voice for systemic change.

Women religious leaders, she said, are grappling with some of the most “complex realities of today” that their congregations have ever faced. These include reorganization, consolidation of provinces, decisions regarding congregational property, underfunded health care needs, vocations, fundraising needs – and, in some cases, the very future of orders.

Their congregations, she continued, also speak out on key issues of the day such as care of the poor, social justice, immigration, human trafficking, the earth’s sustainability, and opposition to terror and the war in Iraq. Their statements have implications for the broader society.

LCWR is there to provide women religious leaders “support in the struggle,” Sister Mary said in an interview with the St. Louis Review, the archdiocesan newspaper.

“It’s not an easy time for women religious,” she said, “and yet it’s an exciting time.”

Sister Mary professed a strong faith in the future of consecrated life for both men and women. Though the average age of women religious in the United States is 69, there still exists tremendous energy within congregations, she said.

Women religious, she added, have a global network and know how to work with global issues. “We want to be able to stay at the table, both in the church and with issues particularly that touch the poor.”

In the history of religious life, there always have been religious communities that have achieved their purpose and gone out of existence, she said.

Many religious today, she said, “realize that we’re in a period of transition to something new. But we’re not far enough in that transition to known what the ‘new’ will look like.” LCWR is helping to ask the hard questions “as we try to make choices that will allow us to move into the future.”

Sister Mary’s background fits well with what LCWR is trying to accomplish. Among her gifts is her strong desire to help link groups and persons with differing views of “church.”

She believes it is important to reach out to other groups, including lay groups, priests and bishops, the Conference of Major Superiors of Men, the Vatican and the Council of Major Superiors of Women Religious, whose membership comprises about 10 percent of women religious in the United States.

Reaching out and reconciling with other groups is first and foremost, but it also is necessary to explore differences, Sister Mary said.

Engaging in such discussions can be painful, she said, but LCWR is committed to following through. The effort requires honesty, courage and commitment to hear and be heard. “We have to be willing to listen to the differences until we get to a new point,” she said.

Some structures already are in place to further this task, including the Commission for Religious Life and Ministry. Members from LCWR, CMSM, the Council of Major Superiors of Women Religious and representatives of the U.S. bishops belong to the organization. It meets twice a year to talk about issues of common interest.

Said Sister Mary: “We need to find ways to help hold that diversity, because after all we’re the same Catholic, Christian faith community.”