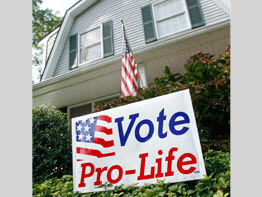 WASHINGTON – American Catholic voters in 2008 tend to be more moderate and less liberal than U.S. voters as a whole, according to a survey commissioned by the Knights of Columbus and released Oct. 14.

“A plurality of Catholic voters, 39 percent, are Democrats, and 45 percent describe themselves as moderate. Only 19 percent say they are liberal,” the survey said.

While more than 90 percent of all Catholics polled said they favored restrictions on abortion, there was less consensus on what kind of restriction should be put in place.

A plurality of 35 percent said they would allow abortion only in cases of rape, incest or to save the mother’s life. The survey also found that 26 percent of all Catholics would permit abortion in the first three months of pregnancy, although 17 percent said abortion should never be permitted and 11 percent would allow it only to save the life of the mother.

Speaking to reporters at an Oct. 14 Washington press conference from Rome, where he was attending the world Synod of Bishops on the Bible as an auditor, Supreme Knight Carl Anderson said the desire of Catholics and Americans to place restrictions on abortion “labels the ‘pro-choice’ designation obsolete.” He added that the term “pro-choice” has been “a particularly polarizing designation.”

A plurality of registered Catholic voters, 36 percent, said homosexual couples should be able to form civil unions. The remaining 64 percent were split evenly – 32 percent to 32 percent – on gay couples being able to legally marry or such couples getting no legal recognition.

Although the poll results indicated that 68 percent of Catholics would favor some kind of legal recognition for gay couples in terms of either same-sex unions or legal marriage, “I would not read it that way,” Anderson said. He had earlier cited statistics that showed that 70 percent of Americans were against homosexual marriage, with 38 percent for granting no legal recognition, plus 32 percent in favor of allowing gays to form civil unions.

The Knights are funding the U.S. bishops’ efforts to support traditional marriage, including development of an Internet video, marketing through social networking Web sites and the redistribution of the bishops’ statement on marriage, “Between Man and Woman: Questions and Answers About Marriage and Same-Sex Unions.”

The economy was considered the top issue by 59 percent of registered Catholic voters. No other issue reached double digits: 9 percent said the war in Iraq was the top issue; 6 percent each, government spending and health care; 5 percent, terrorism; 3 percent, immigration; and 2 percent, jobs. Twelve percent of those surveyed mentioned other issues.

– “Stand for the Christian principles on which this country was founded.”

– “Maintain that life begins at conception.”

– “Be committed to success in the war in Iraq.”

– “Make government funding for the poor a top priority.”