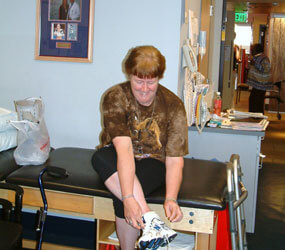 Driving on a highway spotted with black ice near her home in Egg Harbor City, N.J., on Jan. 18, 2009, Susan Cossabone’s car was smashed into by an out-of-control Hamilton Township police car, nearly killing her.

The horse farm owner suffered multiple injuries, including broken ribs, a shorn off kneecap and a completely shattered right ankle.

Surgeons in a nearby hospital were able, over time, to deal with all her injuries except the severely damaged ankle. They said her leg needed to be amputated just below the knee.

“I just wasn’t going to let that happen,” said Cossabone, whose injury had left her in a nearly constant state of severe pain and confinement to a wheelchair.

On May 9, Cossabone sat on a bench in a gym used by Mercy Medical Center’s Institute for Foot and Ankle Reconstruction, and laced up a sneaker on her right foot, the first time she had been able to wear a shoe in two and a half years.

She said her Catholic faith, novenas to St. Jude and the recommendation of a friend led her to Dr. Mark Myerson, director of the Institute, who used a new adult stem-cell therapy to save her foot and restore her ankle to near normal use.

When Cossabone called Mercy to make an initial appointment, she was told Myerson was so booked that he could not take on a new patient.

“I said, ‘put me down in the event of a cancelation,’ and sure enough there was one and I got to see Dr. Myerson, who has been absolutely incredible,” Cossabone said. “We were truly blessed, and I know it was divine intervention.”

The surgical procedure, which Cossabone underwent last November, involved a new stem cell treatment called “AlloStem” that combines stem cells and growth factors to induce bone growth, which was essential for the successful restoration of her ankle.

The stem cells are derived from adult fatty tissue combined with ground cadaveric bone, harvested from an adult, cadaver donor and in no way involving the use of embryonic stem cells, which a Catholic hospital such as Mercy would never consider using, Myerson asserted.

The AlloStem treatment and success rate is “absolutely remarkable,” Myerson said, adding that no other known treatment could have saved his patient’s ankle. “She had a disastrous problem.”

He said the stem cell strips are easy to manipulate and are inserted during surgery, providing all three factors for bone growth: scaffolding, growth factors and abundant adult donor stem cells.

“We’ve been using it at Mercy for almost two years, right after it became available, and it has had an excellent track record,” Myerson said, explaining that the procedure is only used in patients who have a high risk of not healing.

After Cossabone put on her sneakers in the gym, she stood up, her eyes brimming with tears, then slowly walked across the room to embrace Myerson.

“Thank you, thank you. God bless you,” she responded.

“It’s been such a long and tough ordeal,” said her husband, Harold Cossabone, who accompanied her to Mercy. “But she has been a real trouper. It was a true test of faith.”

Titanium rods had to be inserted in Susan Cossabone’s lower right foot in order to assure the ankle’s stability, so her ankle will always feel stiff and lack much of its original flexibility.

“That’s a small price to pay, though, considering I still have my foot and that I can walk again,” she said.

The Cossabones’ 10-acre horse farm has been difficult to manage during the two-and-a-half years that Susan Cossabone was virtually immobilized, but now she says she’s ready to get back in the saddle again.

“I plan on riding my horse by the beginning of this summer,” she said, “and no one’s going to stop me. And it’s all thanks to Dr. Myerson.”