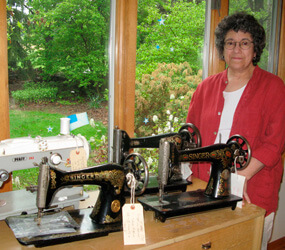 HILLSBOROUGH, N.J. – Clare S. Liptak is combining her Catholic faith with a love of sewing to help the poor in Africa stitch together a better life.

Liptak shipped 30 machines to Tanzania in 2008. This summer, she hopes to send 50 more along with fabric, sewing supplies, carpentry tools, equipment for a culinary program and children’s books. The container being used to ship the items is supposed to be loaded Aug. 7.

The machines remaining in storage are awaiting shipment to poor families in rural Kentucky, she said.

“It is really a lot of fun to do this, and the people who donate are very generous,” Liptak told The Catholic Spirit, newspaper of the Metuchen Diocese. “Often the machine has been in their family a long time and they want it to be used. They don’t want their grandmother’s sewing machine to be thrown away.”

Liptak and Wilson call their project “Give It Up for Good.” They began collecting sewing machines in 2004 to send to the poor in Appalachia.

In 2006, Liptak heard about the daughter of a co-worker who was going on a humanitarian mission to Tanzania coordinated by the Brotherhood of Hope. Six students from the Catholic Center at Rutgers University in Brunswick participated in the mission.

In 2007, Liptak said her interest in Tanzania increased when a visiting priest from that country, Father Venance Ndalichako, spoke during a Mass at Mary, Mother of God Church about his association with schools in that country. After the Mass, Father Ndalichako visited Liptak’s home, where she lives with Joe, her husband of 27 years and “No. 1 volunteer.”

“Kat and I were in the living room cleaning sewing machines,” Liptak said. “I guess Father Ndalichako realized we were serious.”

The meeting went so well, Liptak added, that Father Ndalichako, who teaches economics at St. Augustine University in Mwanza, Tanzania, served as their tour guide when Liptak and Wilson visited Tanzania in November. He also arranged for them to stay at the home of Bishop Protase Rugambwa, head of the Kigoma Diocese.

“The principal at St. Gaspar’s told us enrollment has increased because of the supplies we sent,” Liptak said. “We were really thrilled to have made a difference like that.”

Liptak said that the sewing machines make valuable tools in Tanzania, where the unemployment rate in some areas tops 90 percent.

All the machines sent by Liptak are electric, but some of the older models have a treadle, which allows for manual operation. This is important in areas where power outages are frequent, Liptak said.

For machines in need of repairs, Liptak said money would be included in the next shipment because it is cheaper to repair them in Tanzania and the repairs will create jobs.

She said she hopes other groups will collect sewing machines for women in need. She suggested people on the West Coast could send machines to India or Laos and those in the Midwest might provide them to American Indian reservations.

She also mentioned the Sewing Machine Project – www.sewingmachineproject.org – based in Wisconsin. It was started by Margaret Jankowski of Madison in early 2005 to send machines to women who lost theirs in the tsunami in December 2004. It has focused on the New Orleans area since September 2005, after Hurricane Katrina hit.

Liptak, a former agricultural agent for Rutgers University Cooperative Extension, said her outreach to Africa and Appalachia is an outgrowth of her faith and a desire to serve the community.

“I have always been interested in public service and it is what my father taught me,” she said.

“I also like to sew and I would like to go around the world meeting women who sew. Sewing machines don’t seemed to be valued much anymore. A lot of people don’t sew maybe because clothes are inexpensive, but also because people don’t really have time,” she added.