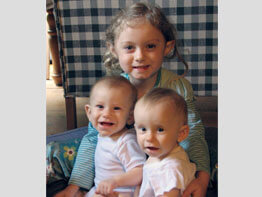 WASHINGTON – As committed Catholics, Timothy and Dawn Smith respect Vatican pronouncements, but recent statements about frozen embryo adoption from church officials have bewildered the Fitzwilliam, N.H., parents of three children who came into the world through this process.

In the document “Dignitas Personae” (“The Dignity of a Person”) – released at the Vatican Dec. 12 – church leaders did not condemn frozen embryo adoption, but said the practice raises serious ethical concerns.

Vatican officials insist no fully moral solution exists for dealing with frozen embryos, not even the idea of adopting or “rescuing” abandoned embryos to bring them to full development and birth.

“If the church did come out and say you can’t adopt frozen embryos, we wouldn’t openly challenge church teachings,” said Timothy Smith, 44, whose wife Dawn, 40, has given birth to three children who were adopted as frozen embryos and believes their road to parenthood was morally righteous. “But, the door is still open a crack here. Until that is shut, we would like to say we think this is a very good thing to do.”

When the Smiths married in 1991 they knew they wanted three or four children, but learned in 1997 they were infertile. They have chosen not to publicly discuss the details of their infertility.

As they researched their options, the couple – who were living in Delaware at the time – discovered that people who go through in vitro procedures sometimes donate their excess frozen embryos to others incapable of conceiving children through marital sexual intercourse, and decided this was the course they wanted to take.

Though they subscribe to church teachings that artificial methods of procreation, such as in vitro fertilization, are immoral, the Smiths believe they protected the lives of their three children by adopting them as frozen embryos and providing Dawn’s womb as a nurturing place for them to grow.

They understand the church’s position on procreation, but were still surprised at the contents of the bioethics document released by the Congregation for the Doctrine of the Faith.

“I would have thought that, after some reflection on the matter, they would have leaned a little more” in favor of the practice, Mr. Smith said. “It doesn’t read like they talked to people – especially Catholics – who had gone through this and weighed the moral issues involved.”

The only completely moral way of acting is to stop creating and freezing embryos, which have the dignity of human beings, the document said.

Speaking at the Dec. 12 Vatican press conference to explain the document, Bishop Elio Sgreccia – former president of the Pontifical Academy for Life, who helped prepare the Vatican’s new bioethics document – told reporters: “The basic advice, explicitly stated in the document, is that embryos must not be frozen. It is one of those actions that has no remedy. Once it is done, correcting it implies committing another error.”

Archbishop Rino Fisichella, current president of the academy, told reporters that “the discussion is still open” and the Vatican has not completely ruled out the possibility of embryo adoption, although it is leaning toward an entirely negative judgment because embryo adoption involves the future parents in an immoral process.

But according to that reasoning, Mr. Smith said, “How is the traditionally adoptive couple not also participating in an immoral act – in many cases they’re assisting the unwed mother who had sex outside marriage.”

The document specifically cited ethical norms that make “artificial heterologous procreation illicit as well as any form of surrogate motherhood.”

Heterologous procreation refers to procedures in which both the egg and the sperm come from donors.

“In surrogate motherhood the woman who gives birth doesn’t keep the child,” he said. “Further, surrogate motherhood involves deliberate creation of new embryos. The issue with frozen embryos is that they are already in existence. They are fully human beings, a complete set of chromosomes – DNA unique to themselves. Not to mention they have a soul.”