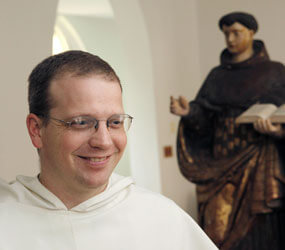 WASHINGTON – A conviction that the 13th-century writings of St. Thomas Aquinas can foster a fruitful dialogue with contemporary culture is the true cornerstone of the newly built academic center and theological library recently inaugurated at the Dominican House of Studies in Washington.

Participants in the inaugural weekend activities probed the challenges and possibilities the Thomistic tradition encounters in today’s world.

The Dominican house is a landmark of Michigan Avenue in northeast Washington, adjacent to The Catholic University of America. When construction of the new building commenced, some surely wondered whether plans to attach it directly to the Dominicans’ much older building could succeed without damaging the property’s overall beauty and balance.

But the architects succeeded well at blending the exteriors of the old and new. They excelled at perhaps an even higher level on the interior where one encounters inviting, contemporary classrooms and a library whose grand, impressive windows not only allow the sunlight in, but marvelously frame the view across the road of university buildings and lawns, and the famed Basilica of the National Shrine of the Immaculate Conception.

The new center houses the Pontifical Faculty of the Immaculate Conception, conducted by the friars of the Dominican order’s eastern U.S. Province of St. Joseph. Future Dominican priests, other seminarians and laypeople study there. Before many years, the center hopes to award theology doctorates.

“Our renewed emphasis upon Thomism, evangelization and the dialogue between faith and contemporary culture sets us apart,” said Dominican Father Steven Boguslawski, president of the pontifical faculty. Its “renewed mission,” he said, focuses on an “open Thomism,” entailing dialogue with both contemporary and historical theology.

Thomism is based in the work of St. Thomas Aquinas, a philosopher and theologian who himself was a Dominican. For centuries his writings set the standard for Catholic theologians. His thought was introduced to generation upon generation of future priests and Catholic college students.

In core-curriculum theology and philosophy courses, college students learned about natural law, God’s existence, humankind’s innate disposition toward God, the meaning of human life, creation’s goodness, the unity of body and soul, the harmony of faith and reason and a host of other Christian concerns.

But the past 50 years witnessed a distrust of Thomism, judged by some to be “a system of thought with fixed ideas that simply supplies the answers and doesn’t permit questions,” according to Dominican Father Thomas Joseph White. At 38, he is one of the youngest theologians on the faculty at the Dominican house.

In an interview in his office April 20, Father White said that, “in a nutshell,” Thomists are “taking perennial wisdom and engaging in a profound conversation with contemporary issues.” However, two temptations lie hidden within that statement, he cautioned.

“In the desire to be relevant, there is a temptation to abandon commitment to perennial wisdom and the understanding of our forebears,” he said. “On the other hand you can have the temptation to eschew contemporary problems or issues and retreat into a pure traditionalism. We want to avoid both those extremes.”

Thomism is not “a system of preconceived answers that you just have to fall in line with,” Father White said. He described Thomas Aquinas as “intellectually creative,” adding that he was “thoughtful in the way he’s traditional, and he’s very careful in the way he’s creative.”

What “open Thomism” means is clarified when it is realized “that Thomas Aquinas attempted to see all things in the light of God,” Father White said. Aquinas is “trying to get a God’s-eye view of reality,” he added. The medieval theologian tried “to summarize and put in harmony all the various ways of authentic understanding and various truths about the world in light of the highest truth, who is God.”

Further clarification comes with the realization that Thomism takes “the nature of reality seriously,” Father White said. While “all things come from God,” at the same time “the things that come from God have their own integrity and reality, and need to be respected,” the priest said.

Gregory LaNave, assistant professor of theology at the pontifical faculty, said there is a “Thomistic renewal going on today.” It involves both a rediscovery of Thomas Aquinas and a re-presentation of his thought.

In addition to teaching, LaNave serves as managing editor of The Thomist, a quarterly journal that cultivates “dialogue between modern and contemporary philosophical systems, and the classical tradition of philosophy and Christian theology.”

Thomism today is dynamic, said LaNave. One vital role it fulfills is to remind contemporary culture about the importance of metaphysical questions – questions, for example, involving the nature of things or “what things are.” That is “a huge issue in contemporary society” – to grasp the nature of the person, of society, of family, of government, he said.

There is a tendency to say “Metaphysics is just not the way we think anymore,” though “when you really push it, you have to talk metaphysically,” LaNave said.

Father White, in his first year of graduate-level teaching, said he feels “mildly intimidated” by the newly opened wing at the Dominican house. “It’s a wonderful new setting in which to teach,” he said, but it impresses upon him “the duty not to take for granted” what he has been given.

It would not be “as exciting,” however, were it not for the new vocations the Dominican province is welcoming nowadays – eight to 12 annually, Father White said. “You have to feel like something is happening that’s coming from the Holy Spirit.”

Father White noted that many new entrants “are very educated” before they arrive in the order and “want to engage the culture intellectually.” So “we need to give them something to challenge them,” he said.